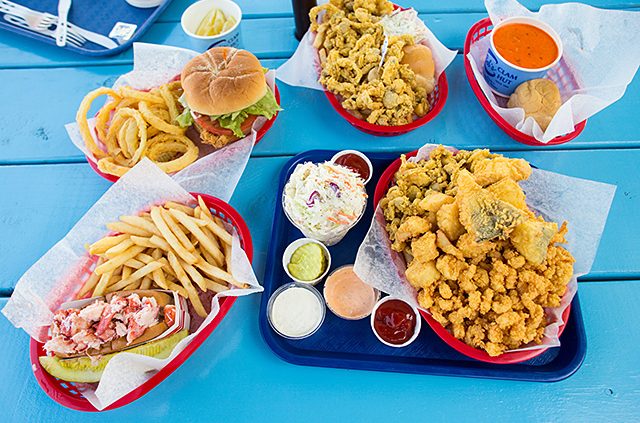 A sampling of the delicious offerings at Bob's Clam Hut in Kittery, Maine. (Photo: Jennifer Bakos)

What’s the best recipe for a summer meal? Take one part fresh-off-the-boat seafood, one part sunshine, add a dash of ocean breeze, a squeeze of lemon and voila! Here are some of our favorite New England clam shacks. Share yours in the poll below.

Located just steps off the docks of Point Judith, where all of the fishing boats full of that delicious calamari come in, is Champlin’s. The first floor is a seafood market where you can pick out your own lobster. The second floor is the Seafood Deck, where you can have it cooked. Champlin’s serves clam cakes, white, red and clear chowder, and all of the traditional clam shack fare. There’s also a shucked-to-order raw bar and an outdoor bar serving up killer mudslides.

Jim’s Dock is closer to Champlin’s by sea than by land. Even though it’s in a different town, it’s a stone’s throw across Galilee Salt Pond Harbor to Point Judith. This BYOB restaurant is as casual as they come, and people regularly roll in from a day at the beach in their bathing suits and shorts. Don’t miss the interesting variations on calamari, and the Point Judith “stuffie” or stuffed quahog clam, a Rhode Island staple.

The line can be long at The Clam Shack, which sits right on the bridge over the Kennebunkport River. That’s because a lot of people have tried the legendary fried clams in the over 50 years that the restaurant’s been open, and most come back for more. Order at the window and eat at one of the restaurant’s picnic tables or take it to a spot along the main thoroughfare of this idyllic Maine town. Don’t miss the signature lobster roll served on fresh bread.

Bob’s Clam Hut has been feeding hungry crowds in southern Maine since 1956 and is so popular that the restaurant recently opened another location in Portland. Here, the whole belly clams come Bob’s style (breaded then fried) or Lillian’s style (dipped in egg wash, then breaded and fried, so they come out with a lighter texture and consistency), on a roll or as a dinner plate with fries and coleslaw. Combo platters, where you can combine clams with shrimp, scallops, fish or oysters, are where it’s really at. Instead of keeping tips left behind in tip cups, Bob’s donates that money to worthy causes; there’s even a form on its website to apply as a beneficiary.

This North Shore food destination has been lining up crowds since 1935, and for good reason: Clam Box dishes out some of the best seafood in all of the Bay State. Choose from clams, scallops, shrimp, haddock, calamari or oysters – and in a nice change from tradition, you can pick onion rings in place of your fries or your coleslaw. Smaller “mini meals” are a nice choice, especially if you decide to add a seafood-only “box” or two for the table.

Larsen’s, in the tiny fishing village of Menemsha, isn’t really all that close to the ferry landings at Oak Bluffs or Vineyard Haven. Menemsha is part of Chilmark, which is almost as far west on the island as you can get. But the trip out to Larsen’s is worth it, especially at the end of the day, when the sunsets from the picnic tables are spectacular. The menu is small – lobsters, chowder, stuffed clams and scallops, steamers and mussels – but it’s as fresh as seafood comes and really makes the case for life’s simple pleasures.

While you’ll get clam cakes in Rhode Island, you’ll get clam fritters in Connecticut. And if you order them at Costello’s, you’ll get to eat them right on the docks of the Mystic River and look out at views of three states at once. This BYOB restaurant is so close to the shore it offers directions by land and by water. The menu is slightly bigger than your average clam shack – it also has items like fish and shrimp tacos, and several salads – but if you don’t get some Noank-style clear chowder and some fritters for dipping, you’re missing out. 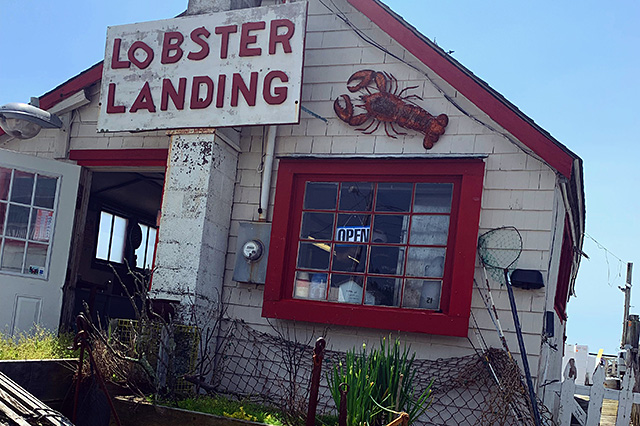 Lobster Landing sits on Clinton Harbor, squarely in the center of Connecticut’s coast, and overlooks the Long Island Sound. The small menu is written on a white board inside the photo-worthy seaside shack, and the owners welcome customers to bring anything they don’t serve. So while you should definitely order some steamers and the restaurant’s specialty hot lobster roll, you could, theoretically, bring a cooler with a dessert tucked inside. Just a suggestion.

Which clam shack completes your summer? Tell us about it in the comments.