Unique Holiday Traditions Around the World

See how other countries celebrate this festive time of year with our list of holidays traditions around the world. 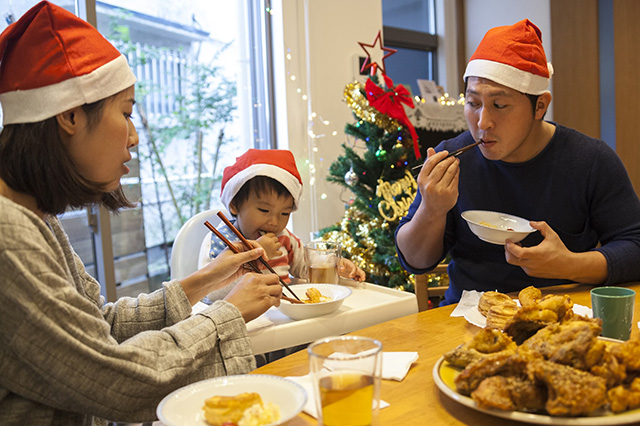 The holiday season is finally here and millions of people all over the world will celebrate traditions that date back centuries. From dressing like a witch to enjoying a KFC feast on Christmas, these customs and holiday traditions around the world may surprise you.

For almost 50 years, KFC has promoted fried chicken as a Japanese Christmas meal with its advertising campaign, “Kurisumasu ni wa kentakkii!” (Kentucky for Christmas!) More people continue to skip turkey and ham for chicken as an estimated 3.6 million Japanese families dine out annually for the holidays. Believe it or not, KFC has become so popular on Christmas that those who don’t preorder risk waiting in line for hours. For many, the tradition is more than the meal – it’s about being with family and friends.

On the evening of Dec. 5, some children across Europe put shoes by the fireplace for St. Nicholas to fill with presents and treats. Unlike Santa, those on the naughty list don’t get a lump of coal – they’re visited by a beast-like creature called Krampus. Public celebrations in Austria feature kids dressed as angels and devils as well as an appearance by St. Nicholas and his frightening counterpart. The tradition has made its way to America, as some people have been celebrating Christmas dressed as Krampus.

Shop restaurants near you to get the best deal, every meal!

India is a land full of diverse cultures and traditions celebrated by over 1 billion people. From Jan. 15-18, India’s Hindu population celebrates Pongal, a four-day harvest festival that lauds the arrival of the sun in the northern hemisphere. During this time, people exchange gifts, place clay oil lamps on roofs to honor the sun and decorate mango and banana trees throughout their community. Each day of Pongal is observed differently with unique customs such as the third day, Mattu Pongal, which is marked by praying and decorating the local cattle. There’s even a special parade to honor the cows in hopes of having a better harvest season.

Before Santa, there was La Befana. On Jan. 6, parades of people dress as a witch-like woman with a long crooked nose and a broomstick. One of the oldest holiday traditions around the world, it dates back to the 13th century, with Italian folklore describing a witch who climbs down the chimney the night before, bringing gifts to children throughout Italy. Of course, being Italian, she much prefers food and wine over cookies and milk.

During the darkest days of winter, it’s a tradition in Finland to light candles by the graves of relatives on Christmas Eve. As eerie as it may seem, the sight of the decorations glowing in the snow at sunset can be a moving experience. The century-old tradition also includes parades and street-lighting ceremonies as people gather for Christmas activities, including an appearance by Santa Claus, known in Finland by Joulupukki.

As much as we love a Northeast Christmas, this is one of those holiday traditions around the world that we could get used to. Since Christmas coincides with summer in the Land Down Under, residents ditch sweaters for sunscreen as the day is filled with festivities including barbecues, beach games and road trips. You’re more likely to see Santa surfing than someone making snow angels – it hardly ever snows there. Despite the different weather, Aussies have similar traditions as most spend the day celebrating with friends and family. The day after, known as Boxing Day, also closely resembles Black Friday as retailers promote big discounts.

Most Americans are familiar with Kwanzaa as it coincides with Christmas and Hanukkah, but many are unaware of why the holiday is celebrated. Derived from the Swahili phrase “matunda ya kwanza,” meaning “first fruits of the harvest,” Kwanzaa commemorates African American culture and heritage. The seven-day celebration begins on December 26 and involves a gathering of friends and family who exchange gifts and light a series of black, red and green candles, which serve to symbolize seven values of African American family life: unity, self-determination, collective work and responsibility, cooperative economics, purpose, creativity and faith.

Known as the Spring Festival in China, the Chinese New Year has been celebrated for over 4,000 years to mark the end of winter and the start of spring. Falling each year between Jan. 21 and Feb. 20, the 15-day holiday serves to bring as much good fortune for the new year. This season, the 2020 Chinese New Year is the beginning of the year of the rat, which starts Jan. 25. The main activities of the holiday include putting up decorations, eating a reunion dinner with family on New Year’s Eve, watching fireworks and giving red envelopes usually containing money and other gifts.

Want to experience any of these unique customs first-hand? Start planning your trip for next year with AAA Travel.

Let us know in the comments section which of these holiday traditions around the world surprised you most.

One Thought on “Unique Holiday Traditions Around the World”