Tour Asia: The Top 10 Sites in Sri Lanka to See on Your Asia Vacation

Experience millennia of history and culture in Sri Lanka. 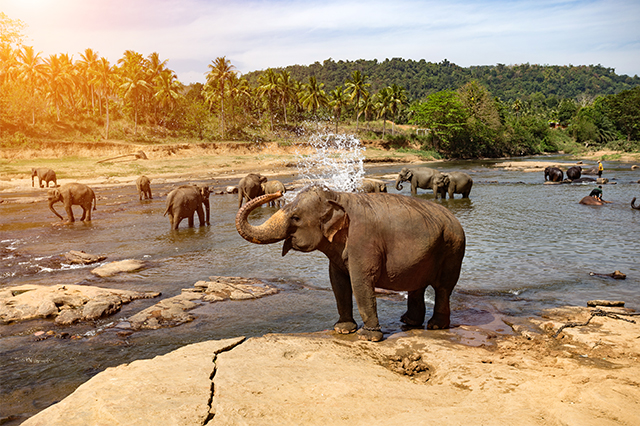 The beautiful island nation of Sri Lanka is becoming an increasingly popular destination for travelers who want to tour Asia off the beaten path.

Formerly known as Ceylon, Sri Lanka’s dominance in tea production made it a target for colonization. Because of its Portuguese, Dutch and British colonial history and its location near India, Sri Lanka is a cultural crossroads. You can experience millennia of history and culture at Sri Lanka’s top 10 sights.

In the 400s King Kasyapa selected this 660-foot tall rock for the site of his capital. He built his palace atop the massive natural formation and adorned it with frescoes, many of which have since disappeared. Visitors can still see the larger-than-life-sized lion paws that guard the palace’s entrance from which Sigiriya gets its name, meaning “lion rock.” From the top of the palace you’ll be able to see some of the oldest landscaped gardens in the world and the backdrop for Duran Duran’s video for “Save A Prayer.”

The seaside city of Galle is known for its historic fort and melange of cultures. Remainders of the Portuguese colonial influence can be seen in the architecture throughout Galle’s 16th-century fortress, while the Dutch influence remains in the street names that have remained unchanged since the late 18th century. While you’re in Galle you can watch brave souls cliff dive from the citadel’s Flag Rock, learn about local history at the Marine Archeological Museum and witness cultures cross at the Dutch Reformed Church.

Yala National Park’s wildlife is unlike that of other Asia destinations. In addition to having one of the highest population densities of leopards in the world, Yala National Park is home to 215 bird species and 44 mammal species including elephants and bears. The park is also the site of the Sithulpahuwa and Magul Vihara ancient Buddhist monasteries.

Polonnaruwa became Sri Lanka’s second royal capital in the late 10th century after the first, Anuradhapura, was pillaged. What remains of the medieval capital is a compact complex of well-preserved ruins that are easy to explore by bike. Highlights include the Royal Palace ruins, the Quadrangle (the epicenter of Polonnaruwa’s archaeological sites) and Gal Vihara, an iconic collection of larger-than-life-sized Buddha carvings.

Pilgrims and tourists alike come to the Temple of the Tooth (also known as Sri Dalada Maligawa) to visit the relic of Buddha’s tooth, from which this temple gets its name. When Sri Lanka was a kingdom, it was said that whoever was in possession of this tooth was in control of the kingdom. Although Buddha’s tooth is tucked away safely inside a series of nesting caskets, a visit to the temple is worthwhile for its spectacular architecture. While you’re already on the palace grounds of the ancient Kingdom of Kandy, visit the palace and its museums.

Although Sri Lanka is full of ancient wonders, a visit to this island nation would be  incomplete without experiencing modern Sri Lanka. While neighboring suburban Sri Jayawardenepura Kotte is Sri Lanka’s legislative capital, Colombo is Sri Lanka’s largest city and commercial capital.

There is much to be enjoyed and explored in Colombo. Hedonists can soak up the sun at the city’s beaches and stroll along Galle Face Green, a seaside park where locals fly kites and watch life go by. Culture lovers can learn about Sri Lanka’s colonial history at the Colombo National Museum and Dutch Museum. Whatever your travel style, Colombo will have something for you.

The Dambulla Cave Temple has been a Buddhist pilgrimage site for the last 22 centuries. The temple’s collection of 150 Buddha statues, vibrant murals and statues of Sri Lankan royalty has been a work in progress for much of that time as kings have been contributing artwork to the caves from the 1st century BC until the 20th century CE. Today visitors can enjoy the magnificent collection in the largest and best-preserved cave temple in Sri Lanka.

No Asia vacation is complete without encountering the incredible indigenous wildlife. The Pinnawala Elephant Orphanage is the place to do just that in Sri Lanka. The orphanage opened in 1975 after modern development created habitat loss for Sri Lanka’s elephant population. Because elephant calves rely on their mothers for food for the first five years of their lives, the orphaned elephants that come to Pinnawala are hand-reared. Visitors can watch these majestic animals’ daily care routines like milk and fruit feedings and bath time in the river.

During colonial times Sri Lanka was known as Ceylon, which is now synonymous with some of the world’s finest teas. Today Sri Lanka is the world’s fourth largest producer of teas, and tea production is a great source of employment for the country. While Sri Lanka’s Sabaragamuwa province is best known for its tea production, tea plantations can be found all over the country. Find a tea plantation to tour to discover the authentic flavor of Ceylon tea.

Have you been to Sri Lanka? Let us know what sites you recommend in the comments below.