Driving in Sicily: The Long and Winding Road 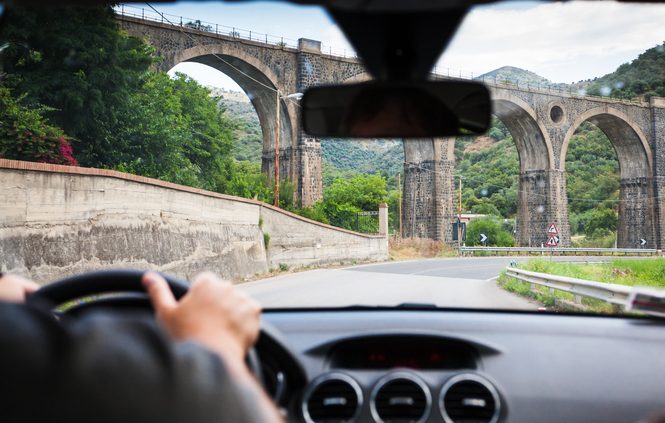 A road trip in Sicily fulfilled a personal goal of driving abroad – and tested my driving moxie against their notorious drivers.

My first impression of driving in Italy came from overhearing a colleague throwing out ideas at work: “Just like road signs in Italy, these are merely suggestions.”

Sixteen years later I could attest to that firsthand with my first Roman cab ride – the only recollection of which is my wife and I clutching each other in the back seat, equal parts fear and fondness. A few days later, we boarded a Trenitalia for a seven-hour train ride. The train itself boarded a ferry on the way to Messina, the first stop in Sicily, where we would visit family I’d never met before.

A few days into our stay, we were brought to Montalbano Elicona, the town where my father was born, 40 miles west of Messina. Cousin Carmelo did the driving as we sat in the back overlooking the steep hill we needed to ascend to reach the town. As Carmelo confidently sped around tight turns with not much more than a stone wall protecting us from potential doom, I assured myself, “They do this all the time.” 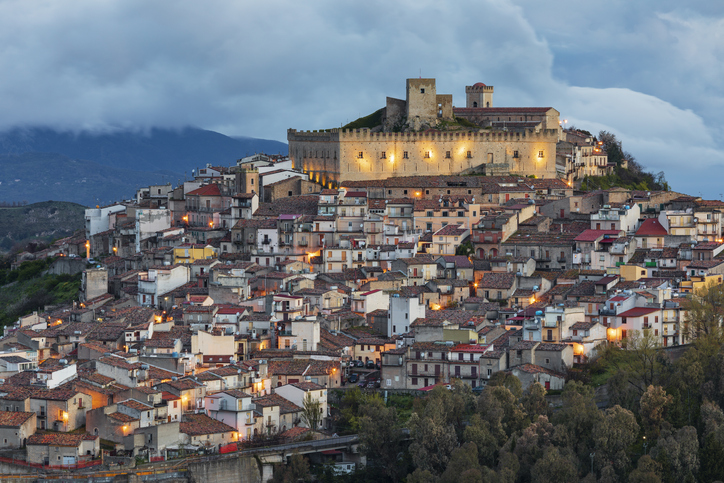 The skyline of Montalbano Elicona at dawn.

We departed three days later, with Carmelo driving us to the airport – and missing the airport exit. We expected him to take the next exit to turn back. Instead he turned back ‘Sicilian style’: put the car in reverse, back up for a few hundred feet and take the exit.

No shoulder? No worries.

My turn to drive in Sicily would come six years later during a couples trip, circling the island at Italy’s boot tip. Our six-day journey planned for us to pick up our car in Palermo, drive south to Agrigento to visit the Greek ruins, cut east to Taormina, a quick stop north to see the family again in Messina, then back across to Palermo.

The beaten path rarely being the most interesting, en route to Agrigento we diverted to the Cattedrale di Monreale, the UNESCO World Heritage site located in the eponymously named town. The roads here were not designed with cars in mind. The first anxious moment was when a local tailgated us as we made the way up the winding one-lane road to the cathedral. My sense that we were holding up traffic was justified when I allowed a driver behind me to pass and received a less than welcoming wave from him in return.

We garaged the car and arrived at the cathedral with a few minutes to spare before the Italian afternoon riposo, just enough time to awe at the 12th century Norman architecture. The next stop brought us to Sciacca, and that stretch of SS624 didn’t disappoint, gifting us with a stunning hilly landscape. As we got closer, we caught our first view of the Mediterranean Sea.

Agrigento was among the largest cities of the ancient Greek empire. It sits on a plateau overlooking the Mediterranean; the Valley of the Temples, Agrigento’s main attraction, is also recognized as a World Heritage site.

Two days later, for the run from Agrigento to Taormina, I took a break from driving to enjoy the view from the backseat. The diversion on that leg of the trip was the town of Piazza Armerina and the third UNESCO site on our itinerary, the Villa Romana del Casale. The mosaics in the 4th century Roman resort made the stop worthwhile. 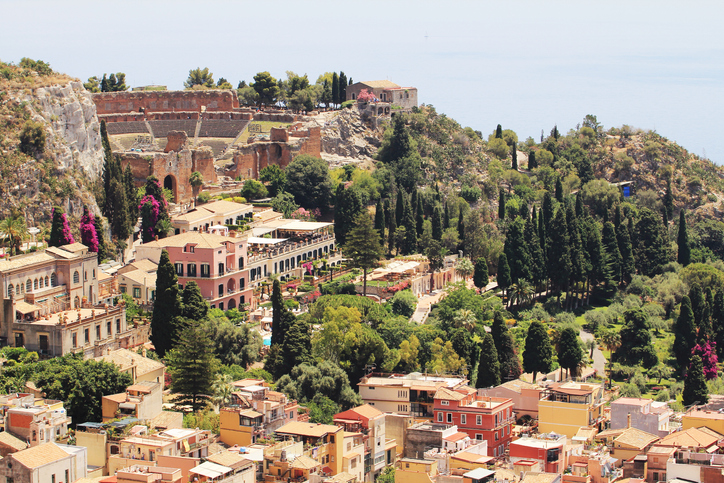 Continuing from the villa, it was easier to see the sights unfold from the backseat as Sicily continued its run of hilly landscapes, fertile vineyards and a shepherd using much of the road to guide his sheep.

We hit the Autostrade for the first time as we reached Catania. From my phone I determined that the toll from Catania to Taormina would be €1.70 and payable by credit card or cash. I patted myself on the back and texted this intel to my wife who was riding in the ladies car.

Upon reaching the Taormina exit, we inserted the credit card into the toll machine – and saw it gobbled up. A few tense minutes passed with the credit card not forthcoming as we tried to converse with an agent over the intercom.

Eventually the machine gave up its catch, which we exchanged for dropping two euros in the basket and sped off. I subsequently learned that American credit cards aren’t suitable for the toll road and the wives had wisely paid cash.

The trip up the hill is a scenic single lane that brings you into the heart of Taormina. Miss a turn there and you’ll find yourself either circling the town again, facing the wrong end of a one-way, or in a local’s driveway (as my wife’s car did).

As we arrived at the hotel, we were happy to garage the cars and become pedestrians for the next three days, Taormina being very walkable.

It was easier to let Angelo, a local guide, drive us to Mount Etna on our third day there. On our way back to town, Angelo took us to the Madonna della Rocca, a 1640 church built in the rock which hangs high over the town. The road leaving the church cannot allow large tour buses and provided its own acrophobia-inspiring overlooks. 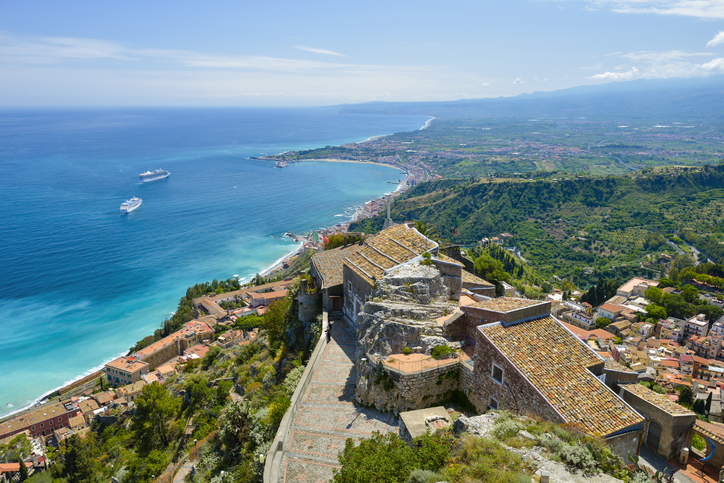 Back on the road the following day, we headed north to Messina, enjoying the view of the blue Ionian Sea hugging A18/E45. At the Messina Centro exit (paid that toll in cash!), I was confident we would reach the family by 1 p.m. as promised. Guided by GPS, we took a turn that led up a somewhat familiar road. The roads were wide enough for no more than a parked car and one lane of traffic to accommodate both directions.

So, what to do when a car inevitably comes in the opposite direction? Always defer to the local, hit it in reverse and hopefully find a spot to back into. But how do you do that when another driver is on your tail? The spot we found was not easy to get back into and in that panic, I looked in my rearview hoping for some sympathy. Instead I saw frustration as my tailgater clasped his hands in a very animated way, wagging them, plainly praying to the driving gods that I would get out of his way.

It was now apparent we needed to turn around. As I looked for a place to reverse, our next obstacle came into view: A large tree branch extending three quarters across the road. The branch itself wouldn’t have been difficult to drive over, but that would have meant bowling over the bent-over woman picking whatever the branch was offering – berries, figs, pistachios or maybe olives.

She and our car had a standoff, which we lost; she continued to pick at the branch. We crept around the branch and advanced a few dozen meters to make our U-turn. The unforgiving road was not much wider than the length of our car, making the U-turn tight and treacherous. A fence bent over 45 degrees, overlooking a sharp hill drop, was evidence that other drivers had done this before. Fifteen to 20 delicate K-turns later, we were on our way back. 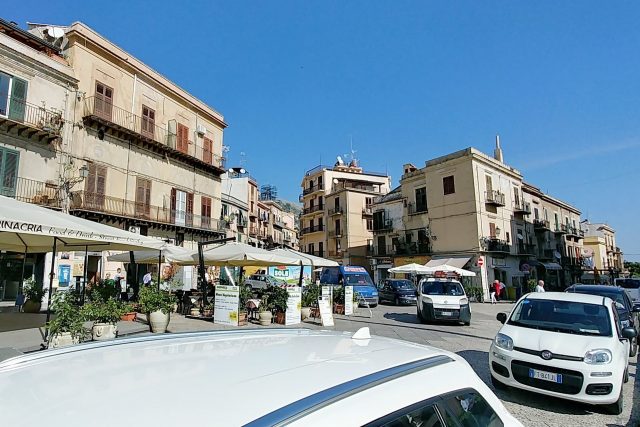 The lost time made the visit with family too short. We considered staying overnight, as we indulged on pancetta-wrapped scallions and braciole paired with homemade creamy limoncello and red wine. But rather than risk missing our morning flight, it was best to move on.

Three hours later, we found ourselves in Cinisi, just south of Palermo – a favorite overnight spot for early-morning fliers. The next morning, after one final missed turn, we reached the rental car return.

The rental agent thoroughly inspected the car and joked “You’re a killer.” In his thick accent he points out a small bird carcass wedged in the wheelhouse. Add that regret to the list of unexpected yet mostly endearing memories.

Nick Popolo is a longtime AAA member from Staten Island, NY. Connect with Nick on Twitter at @npopolo.

For information on International Driving Permits and how you can get one, visit AAA.com/IDP.