Plan a trip to this national treasure with our Yellowstone Park guide. 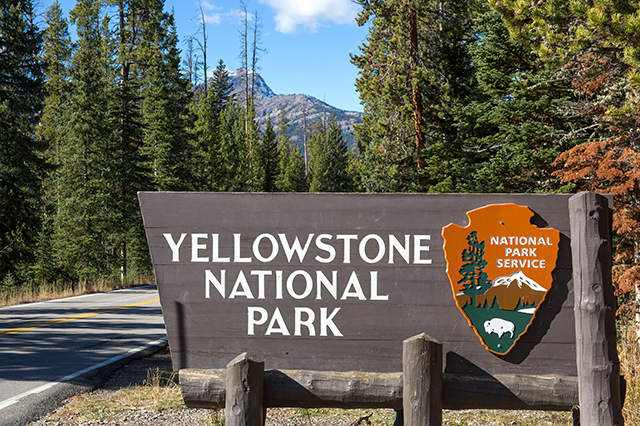 America’s first national park, Yellowstone National Park attracts four million visitors a year from across the country and all corners of the world. Spread across nearly 3,469 square miles in Wyoming, Montana and Idaho, the park offers visitors a glimpse at some of the West’s most famous fauna, such as grizzlies, buffalo and wolves.

Guests also marvel at evidence of the earth’s active geothermal activity with the park’s bubbling hot springs and gushing geysers, and can enjoy the serenity of the wide-open valleys and the sparkling stars in the dark, velvety night sky.

This Yellowstone National Park guide will help you plan the trip to this national treasure that best suits your interests.

Visitors can access Yellowstone National Park through one of its five entrances and learn more about its history, geography and geology, and wildlife at one of the ten visitor centers located throughout the park.

Though the park is open year-round, its busiest season is late spring until early fall. Cold-weather lovers can tour portions of the park in the winter and partake in the activities described later in this Yellowstone National Park guide, but not all roads and sites are accessible, and the majority of services are not open during the coldest months.

Yellowstone’s mountains, lakes and rivers are breathtaking, but what attract the biggest crowds are its geothermal sites. Mammoth Hot Springs, near the North Entrance, entices viewers to walk along boardwalks through multicolored travertine terraces and steam rising from the boiling springs and mud pots.

Other hot springs, many featuring vibrant colors due to the water’s mineral content, are scattered throughout Yellowstone. The largest at 370 feet wide and 125 feet deep is the Grand Prismatic Spring, located in the Midway Geyser Basin in the western portion of the park. For those seeking a more dramatic display of the earth’s power, the geysers are the main attraction. Yellowstone contains around 60 percent of the world’s geysers, with Old Faithful being the best known.

To avoid the crowds at the most popular sites, visitors should explore some of the less-well-known areas of the park, such as the Lamar Valley, where the wide-open spaces attract large herds of buffalo and other animals. We recommend arriving either early or later in the day – before 9 a.m. or after 3 p.m. is best. Or consider planning a visit in the non-peak seasons of April and September.

What to do: A guide to Yellowstone Park activities

From late May until October, adventure seekers can hike the park’s numerous trails on multiday treks or shorter day trips, raft on the rivers, fish in the streams and lakes, horseback ride, bicycle both on the roads and on mountain bike trails, and take self-guided or guided tours to view the area’s abundant wildlife.

In the wintertime, intrepid outdoor enthusiasts trade the crowds of summer for a more peaceful experience in Yellowstone. However, many of the park’s roads are not plowed in the winter, so some of the sites are accessible only by snowmobile, skis or dogsled.

The western portion of Yellowstone boasts some of most sought-after snowmobile trails in the West, such as the Continental Divide trail, earning it the nickname of “Snowmobiling Capital of the World.”

For those seeking a quieter method of travel or one that provides more of a workout, cross-country skiing can be enjoyed on all of the park’s roads and miles of trails. Though some trails are groomed, most are not. A popular trail is the Biscuit Basin Trail, which loops through Old Faithful’s basin. When snow blankets the terrain, some of the park’s wildlife hibernate or migrate to warmer lands, but many, such as buffalo, elk and wolves, are still active. Visitors can take guided tours to see these creatures, or they can snowshoe or ski out on self-guided tours.

When visiting Yellowstone National Park, visitors have several options for where to stay. In keeping with the great outdoors vibe of the park, many people opt to camp, whether in a camper or tent at one of the park’s twelve campgrounds or completely off the grid in one of the 300 backcountry campsites.

The park also has nine lodges for those who want a bit of comfort with their nature experience. Two of the lodges, Old Faithful Snow Lodge and Mammoth Hot Springs Hotel, are also open in the winter. Visitors can also stay outside the boundaries of the park in the many resorts, hotels, and motels nearby.

The park contains many restaurants, from fine dining in the lodges to casual grab-and-go snacks. Many guests bring food for enjoying in one of the park’s many picnic areas. Some have fire grates for cooking, but visitors are advised to bring their own water because not all sites offer potable water.

Have you ever visited Yellowstone National Park? Would you like to? Tell us in the comments.