The California Road Trip of a Lifetime

Explore the west coast on a California road trip you won’t forget. Get inspiration for how to tour America with our guide. 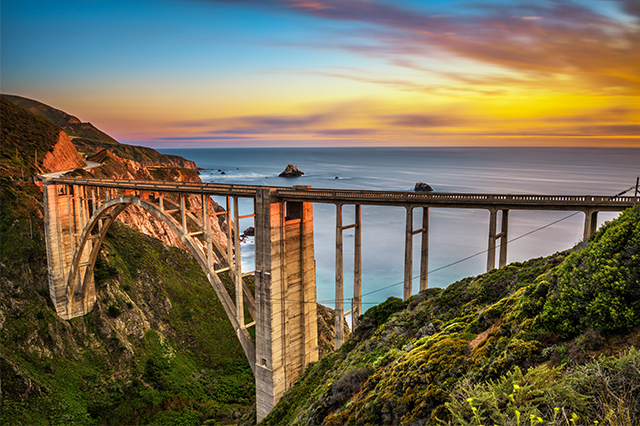 From the great cities of San Francisco, Los Angeles and San Diego to Mother Nature’s masterpiece, Yosemite National Park, you’ll see the amazing sights and landmarks that make California so unique and unforgettable. This California road trip will have you daydreaming about it long after you leave. Keep reading to learn what a California road trip looks like with AAA Vacations.

Tour America along California’s thrilling coast. Your journey opens in “the City by the Bay,” San Francisco. Tonight, meet your fellow travelers at a welcome dinner on Pier 39, overlooking beautiful San Francisco Bay.

After breakfast the choice is yours! Perhaps you’ll choose to take an hour-long cruise on San Francisco Bay featuring an in-depth narration of its history and landmarks including Alcatraz and the Golden Gate Bridge. Or join a local guide for a sightseeing tour of the city. Hear stories of the city’s past and present as you drive past its famous landmarks including the Twin Peaks, Seal Rocks and the Golden Gate Bridge. Your afternoon is at leisure to explore the shops at either Fisherman’s Wharf or Union Square. Perhaps you’ll take a ride up and down the city’s thrilling hills on a classic cable car.

Today you wind through the majestic Sierra Nevada Mountains en route to one of Mother Nature’s greatest masterpieces – Yosemite National Park, a national landmark no American traveler can miss. While camping at the park in 1903, President Theodore Roosevelt called Yosemite “the most beautiful place in the world.” Yosemite’s remarkable granite cliffs, deep valleys, Alpine meadows and groves of beautiful trees will leave you awestruck as they did Ansel Adams, who lived in the park while taking his famous portfolio of striking photographs.

You will have the chance to explore the park on a tram ride that takes you along the floor of Yosemite. Look up at the magnificent formations, including El Capitan and Half Dome, while a local guide gives a narration of the history, geology and wildlife of this internationally famous park.

Travel to Monterey, the city often called the greatest meeting of land, sea and sky. It’s where California’s statehood began in 1849. Monterey is filled with lovingly restored historic buildings and Spanish adobes and is home to the famed 17-Mile Drive, also known as one of the most breathtaking coastlines in the world.

Along the drive you will pass through the Del Monte Forest and see such famous sights as the Lone Cypress Tree, perhaps the most photographed tree in the world; Seal Rock, where the seals may actually bark at you; and the prestigious Pebble Beach Golf Course, where the fairways run along seaside cliffs. Time is available to independently explore charming Monterey and shop at Cannery Row, made famous by John Steinbeck.

Journey 90 miles along the Big Sur coast, flanked by the Santa Lucia Mountains and the sea-sprayed rocky Pacific, for a trip that will surely take your breath away.

Upon arrival in San Simeon, visit one of the world’s greatest showplaces, the palatial mountaintop retreat of Hearst Castle, built by newspaper magnate William Randolph Hearst. Tour the castle, built on a 40,000-acre ranch that Hearst frequently camped on as a child. Now a National Historic Landmark, Hearst was constantly building and rebuilding what he simply called “the ranch.” As a result, the estate was not completed during Hearst’s lifetime and was later donated to the State of California in 1957. Explore some of its 165 rooms and 127 acres of gardens, terraces, pools and walkways. Later, arrive in enchanting Santa Barbara, famous for its breathtaking setting and natural beauty fused from the dramatic mix of mountains, valleys, beaches, islands and the sea.

This morning your tour manager will show you some of Santa Barbara’s most historic sites. A docent will guide you through the Old Mission Santa Barbara, established in 1786. It is often referred to as the “Queen of the Missions.” Some free time allows you to explore the downtown area laced with pedestrian-friendly sidewalks and paseos, with the Santa Ynez Mountains as a lovely backdrop. You may prefer to grab a pedicab (Santa Barbara’s answer to the rickshaw) or hop aboard an eco-friendly electric shuttle to the waterfront area famous for Stearns Wharf, which has been a part of the scene since 1872.

Tour America’s entertainment capital as the coastal journey takes you to glittering Los Angeles, the “City of Angels,” and home to Universal Studios, as well as a host of your favorite musical and film celebrities.

A local guide will board our coach to take you on an exciting tour of Los Angeles and the surrounding area. You’ll begin your tour at the Grand Central Market, then continue past Walt Disney Concert Hall and the Staples Center. A real treat is planned for you with a stop at the Original Farmers Market. Have time on your own to explore. Perhaps you’ll browse the shops or partake in some farm-fresh fare. Continue on to two of the most famous sections of town – Beverly Hills and Santa Monica.

The day is yours to enjoy as you wish. Explore the area independently or choose to join an optional tour of Hollywood to learn secrets of the stars and catch a glimpse of their homes and hangouts. Your tour manager will help you make a perfect choice. Tonight, gather with your fellow American travelers for a farewell dinner.

Your California road trip comes to an end, but the memories will stay with you forever.

Have you ever taken a West Coast or California road trip? Have advice for your fellow AAA members? Share your thoughts in the comments.