Here’s where to find the best gourmet restaurants at sea affiliated with some of the best celebrity chefs in the world. 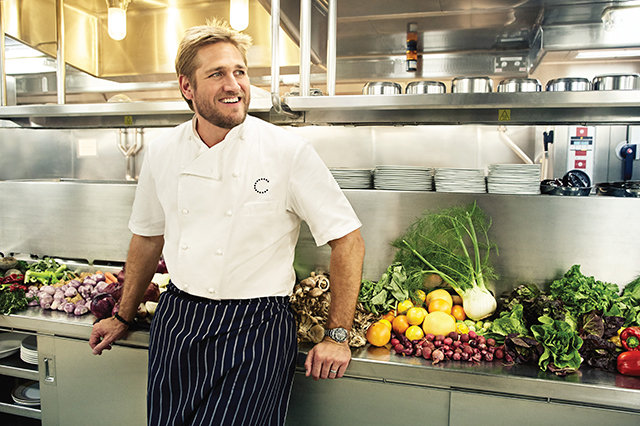 Gone are the days of the endless buffets and uninspired fare on cruise ships. Today, passengers expect the best gourmet restaurants and creative cuisine at sea, and cruise ship companies have stepped up, often teaming with a celebrity and fine dining chefs to help elevate their food game.

In such a competitive market, it’s actually hard to find a cruise line that doesn’t have some sort of celebrity chef affiliation, which means passengers have a wealth of tasty options from exquisite fine French cuisine to award-winning barbecue.

For anyone who never misses an episode of “Top Chef” or watches more Food Network than is probably advisable, here’s where to find some of the best celebrity chefs in the world at sea. While the chefs probably aren’t in the kitchen whipping up your dinner, they sometimes come aboard for special appearances and cookbook signings.

Oceania Cruises went straight to the top of the culinary world when it brought legendary French Master Chef Jacques Pépin into the fold as its executive culinary director. While he’s got a say over all of the menus across the line, fans of his in particular will want to dine at Jacques Bistro, which boasts his family’s recipes for lunch, and at the more formal Jacques, found onboard the Riviera and Marina ships. Super fans should plan ahead and book a cruise when Pépin is hosting a special culinary-themed trip, which he does once a year.

Seabourn Cruise Line teamed up with renowned California-based chef Thomas Keller – the toque behind the Michelin-starred and AAA Five Diamond Rated restaurants The French Laundry and Per Se – to advise on the cruise line’s menus and culinary programs. The Grill by Thomas Keller, a classic steakhouse restaurant, is one of the best gourmet restaurants on a cruise ship and certainly a highlight of any vacation at sea. Happily, Keller’s creations can also be found at the cruise line’s other restaurants too, with special dishes and highlighted menus.

Nobu Matsuhisa has had a working relationship with the luxury Crystal Cruises for more than a decade and even created the first sushi bar at sea, so diners are in for a treat when dining at either The Sushi Bar or at Silk Road, the more formal restaurant which features his classically styled Japanese dishes that have Peruvian and European influences. Signature items, like black cod glazed with sweet miso and rock shrimp tempura in a ponzu sauce, are favorites.

Iron Chef Jose Garces, has two restaurants on the Norwegian Escape, a fine dining spot called Bayamo, and a more casual restaurant called Pincho Tapas Bar. Bayamo offers a menu with dishes inspired from Cuba and Peru, while Pinchos has a variety of tapas and dishes to share featuring Mediterranean flavors and recipes.

In a fun take on the dining experience, famous Australian chef Curtis Stone created SHARE restaurant on several Princess Cruise ships, in which guests enjoy a six-course menu at large communal tables which encourage family-style dining. While SHARE isn’t on every Princess ship (as of now), some of Stone’s dishes can be found on menus in the main dining rooms across the line.

The James Beard Award-winning chef Michael Schwartz, of Michael’s Genuine Food & Drink, Harry’s Pizzeria, Cypress Tavern, and Ella Pop Café fame, has created 150 Central Park restaurant onboard the Harmony of the Seas, the Allure of the Seas and the Oasis of the Seas, much to fine dining lovers’ delight. The restaurant is the centerpiece of the lush Central Park “neighborhood” onboard each of the ships and features a multi-course menu created by Schwartz. The 23-ounce dry-aged rib eye presented tableside is a highlight of the menu, as is the outstanding cheese cart.

It makes sense for a cruise line that stresses fun and frolicking to have tapped the lively Food Network personality Guy Fieri as a consultant. At Guy’s Burger Joint, a casual poolside eatery, passengers can order freshly grilled burgers with hand-cut fries without even having to put on their shoes. Fieri also created another open-air option for Carnival, Guy’s Pig & Anchor Bar-B-Que Smokehouse, which features his award-winning meats and signature sauces.

British chef Jamie Oliver teamed up with Royal Caribbean to create an outpost of his wildly popular Jamie’s Italian restaurant on board several of the cruise line’s ships. The menu offers Oliver’s interpretation of classic Italian dishes with a rustic touch. The pasta, which is always made fresh daily, is a standout, as are the antipasti “planks,” platters piled high with cheeses, meats, and pickles.

What do you think is the best gourmet restaurant on a cruise ship? Tell us in the comments.