Now that many gold coast mansions are open to the public, we can all experience the glitz and glamour of old Long Island. 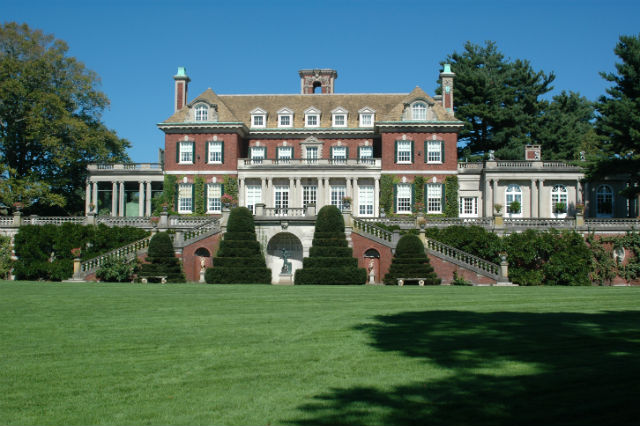 During the Gilded Age, Long Island was a vast playground for the ultra-rich. As the wealthy flooded onto the North Shore of Long Island from New York City, they began establishing sprawling “country houses” – aka mega mansions. These gold coast mansions were enormous, and some of them were so big that they were called “castles.” Very few of the mansions remain private homes today, since the middle class grew and opulent castles started seeming a little gauche.

In their new lives, these mansions have transformed into arboretums, museums, hotels and more. Here are some of our favorite gold coast mansions of Long Island.

Old Westbury Gardens is one of the best-preserved gold coast mansions on Long Island. Built in 1906, Old Westbury Gardens is the former estate of John Shaffer Phipps, a U.S. Steel heir. The Charles II-style mansion is surrounded by 200 acres of gardens, walkways, woods and even a hedge maze. Old Westbury Gardens hosts guided tours of the mansion, as well as a series of seasonal events throughout the year, like the Scottish Games and the Halloween installation of pumpkin art, Rise of the Jack-O-Lanterns.

The estate is a popular location for filming. Notable films and TV shows that Old Westbury Gardens has appeared in include “North by Northwest,” “Cruel Intentions,” “Pushing Daisies” and “Gossip Girl.” It even served as the inspiration for the design of the Buchanan estate in the 2013 film “The Great Gatsby.”

Sands Point (otherwise known as the Guggenheim Estate) consists of not one, but three different mansions; Castle Gould is based on Kilkenny Castle in Ireland, Falaise looks like a medieval fortress and Hempstead House is a 40-room Tudor style manor house. Construction was started by financier Howard Gould, then finished after Daniel Guggenheim purchased the property in 1912.

Sands Point Park and Preserve is filled with woodland hiking trails, and even has a beach on the Long Island Sound. Falaise houses a museum featuring antiques, architectural pieces, fine art and visiting exhibitions.

Oheka Castle is named after its original owner, financier Otto Hermann Kahn. It might sound cheesy, but Kahn came up with the name himself, and used it on a number of properties (and a yacht) afterward. Built in 1917, Oheka Castle is styled after a French chateau. At the time Kahn lived there, it was the second-largest private home in America. Since then, Oheka has had an interesting (and sometimes rocky) history. In the 1940s, it transformed into a military academy, but after 30 years it was abandoned and fell into disrepair. The property was purchased by developer Gary Melius in 1984, then fell into and out of his hands for the next couple of decades until he finally reacquired it and finished the renovations.

Today, Oheka Castle is an opulent hotel and event venue, with 22 acres of finely manicured gardens to boot. Oheka claims to have been the inspiration for Gatsby’s estate in F. Scott Fitzgerald’s “The Great Gatsby,” but most other gold coast mansions have made that claim as well. Its real claim to fame is that its exterior was used to portray Charles Foster Kane’s home, Xanadu, in one of the greatest films of all time, “Citizen Kane.”

Tucked away in Upper Brookville is Planting Fields Arboretum, a 409-acre park filled with rolling fields, intricate gardens and dense woodlands. In the center of Planting Fields sits Coe Hall, a huge Tudor Revival mansion built in 1915. Coe Hall and its surrounding land is the former estate of insurance magnate William Robertson Coe and Standard Oil heiress Mai Rogers Coe. The Coes (especially Mai) were enamored with nature and filled their estate with an enormous variety of trees, plants and flowers. Two giant beech trees were even transplanted there from Mai’s childhood home in Connecticut.

Today, Planting Fields is a state park with grounds that are free to explore. Planting Fields is filled with little surprises and breathtaking landscapes. Apart from the vast Coe Hall, which is available for tours, you can explore two greenhouses (one which exclusively houses camellias), two charming cottages, a carriage house, several reflecting pools and ponds, gothic gazebos and more. If you go at the right time of year, you can travel through a pathway draped with roses on all sides.

The Vanderbilt estate spans 43 acres, purchased in 1910 by William K. Vanderbilt II. Vanderbilt shortly began construction on a sprawling, 24-room mansion in the Spanish Revival style. When it was complete, Vanderbilt christened the mansion “Eagle’s Nest,” due to its position on a hill.

Today, the estate is the Vanderbilt Museum. The museum is a mix of living history in fully-restored rooms of the house and specimens of marine, bird and insect life collected by Vanderbilt himself. In 1971, a planetarium was added to the grounds of the museum. It even has a rooftop observatory, which is open every Friday night.

The Georgian Revival mansion at the center of this 145-acre estate was built in the 1890s and purchased in 1919 by U.S. Steel co-founder Henry Clay Frick (on behalf of his son, the unimaginatively-named “Childs”). Frick hired architect Sir Charles Carrick Allom to do a massive redesign of the mansion. In 1925, Childs’s wife, Frances Frick, commissioned famous landscape architect Marion Cruger Coffin to design a series of intricate formal gardens on the property. The estate was purchased by the county in 1969 and transformed into the Nassau County Museum of Art.

NCMA has a collection of over 600 pieces of fine art and rotates them through periodic museum exhibitions. They also occasionally feature visiting exhibitions, like collections from a specific artist or time period. NCMA also features an expansive sculpture garden, which is free for the public to explore and enjoy.

The museums and beautiful grounds of most of these Long Island gold coast mansions have landed them on our list of the best things to do on Long Island in the summer. Check it out.

Have you ever visited any gold coast mansions? What were they like? Let us know in the comments below!