Halfway between New York City and Boston, Connecticut has everything you need to quench your thirst for outdoor summer fun. 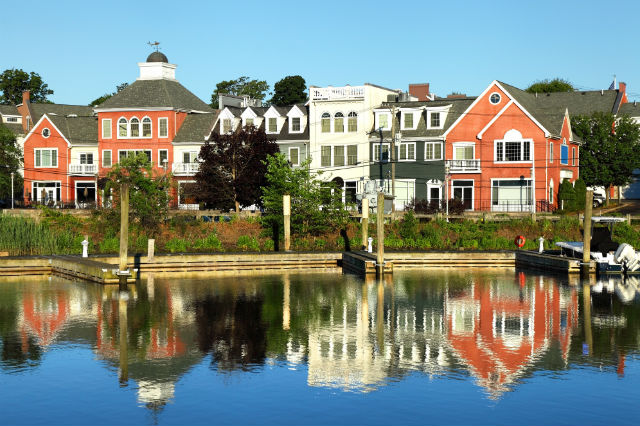 Make sure you’re sitting down. I’m about to tell you something shocking.

All your life, you’ve been told to fly to Florida or the Caribbean for your summer vacation, and all your life you’ve been missing out on one of the best-kept secrets in nearby summer travel: Connecticut.

Halfway between New York City and Boston, all the outdoor fun you need is in the summer in Connecticut: great weather, beautiful scenery, charming coastal communities and some of the freshest seafood you’ll ever eat. And you don’t even need to fly there.

Start planning your trip today with our guide to summer fun in Connecticut.

The beauty of coastal Connecticut might make you forget all about the Hamptons. It’s loaded with lighthouses and incredible coastal communities like the city of Milford, which has more shoreline than any other city in Connecticut. Rent a kayak, paddleboard, bike or scooter from Scoot & Paddle and set out on an expedition of the Milford Point area, where rare birds fly overhead and 400 acres of unspoiled marshland are waiting to be explored.

In Portland, Brownstone Adventure Sports Park is perfect for thrill-seeking nature lovers. This outdoor adventure park has rock climbing, snorkeling, cliff jumping and zip lines. It caters to all ages and groups of any size.

If you’d rather captain your own ship, head to Mystic Boat Adventures in the family-friendly village of Mystic. Drive your own miniature power boat up the Mystic River and see historic whaling ships up close at Mystic Seaport. And if that’s not thrilling enough, you can register for adult summer camp at Kent’s Club Getaway, where the adventures never stop.

Connecticut has earned a reputation as one of the best getaways for families and attractions like Lake Compounce are a big reason why. This family-friendly theme park is home to Connecticut’s largest water park and the world’s top-rated wooden roller coaster. Say hello to dozens of lifelike animatronic dinosaurs in its Dino Expedition area and when you’re all worn out, stay overnight at its campground only steps away from the park.

The thrills and laughs continue at Quassy Amusement & Waterpark in Middlebury, which is also known for great summer events like 3D fireworks and beach parties featuring live music, fire pits and waterslides.

Other family friendly attractions in Connecticut include Mystic Aquarium, where you can see thousands of sea creatures – including New England’s only Beluga whales and endangered African penguins, and Beardsley Zoo in Bridgeport, which has a Siberian tiger, a red wolf and 300 animals from North and South America. Get discounts at Mystic Aquarium with AAA.

Of course, kids can’t have all the fun. That’s where Connecticut’s world-class casinos come in.

Mohegan Sun in Uncasville has hotels restaurants, golf, spas, entertainments and more. Foxwoods Resort Casino in Ledyard has all that and primo outlet shopping, too. Shopping enthusiasts can also head to Clinton Premium Outlets and The Shops at Yale in New Haven for more than 65 boutique shops, national retailers and award-winning eateries.

History comes to life in Connecticut in the form of Revolutionary War sites and coastal communities that date back to the 1700s. Look no further than the Henry B. Dupont Preservation Shipyard at Mystic Seaport, the largest maritime museum in the United States. Here you’ll find an astounding collection of historic vessels like the 1841 whaleship Charles W. Morgan, the last remaining wooden whaleship in the world.

At Putnam Redding Memorial State Park, you can see the site of the Continental Army’s 1779 winter encampment, and at Dinosaur State Park you can stop for a picnic after seeing its Jurassic-era fossil tracks from 200 million years ago.

Recharge your batteries on the green at the nearly 320-year-old Yale University campus and walk the 26-block New London Historic District, which is loaded with art, music and more than 30 eateries (state hero Nathan Hale once walked these streets – and so did Benedict Arnold).

Eating is an adventure too, especially when it comes with views of the Atlantic Ocean. Complete your summer in Connecticut with a local favorite: the buttered lobster roll. Lobster Landing in Clinton, Abbott’s Lobster in Noank and Lenny & Joe’s Fish Tale in Madison are standouts, but you really can’t go wrong when it’s a lobster that was plucked from the ocean earlier that day.

Red 36 in downtown Mystic has a seasonal menu with an extensive raw bar and breathtaking water views. Or try the award-winning steak and seafood at Shell & Bones Oyster Bar & Grill in New Haven (don’t leave without trying the famous clam chowder). For an especially unique experience, head to The Place Restaurant in Guilford. Here you’ll sit outdoors on tree stumps while a crackling wood fire roasts clams and smoky lobsters (open May through October).

If your idea of enjoying summer in Connecticut involves a craft beverage in your hand, then Connecticut is perfect for you, provided you drink responsibly and have a designated driver. The state has a bunch of historic spaces that have been seamlessly outfitted into cool production facilities and hangouts when you need a break from the summer heat. Take Two Roads Brewing Company in Stratford, for example, which transformed a 112-year-old building into a state-of-the-art brewery and taproom.

Willimantic Brewing Company in northeastern Connecticut is stationed in a 1909 post office building and has been serving craft brews to its loyal patrons for more than 30 years. Chill out with a cold one underneath the shade of a colorful umbrella on the steps of the onetime mail center.

And it’s not just the suds that are worth the trip to Connecticut. The Connecticut Wine Trail has more than 20 vineyards and wineries, many of which overlook the stunning countryside or coast – perfect on a sunny summer day.

Connecticut’s summer events celebrate its New England culture and proximity to the Atlantic Ocean. Every July, more than 300,000 visitors head to the New London waterfront district for Sailfest, southeastern Connecticut’s premier summertime celebration. This year’s festival will feature more than 200 food and craft vendors, amusement rides and a firework show. You can even view the festivities from a 19th century cargo schooner with towering masts.

Other popular summer events in Connecticut include the Mystic Outdoor Art Festival and the Brooklyn Fair agricultural extravaganza in August, and the East Norwalk Oyster Festival in September.

And the best part? Connecticut is so close that you can get there easily – and quickly – by train or car. And whether you decide to stay for a couple of weeks or a weekend, you’ll find one of the best summer escapes has been right in your backyard all along.

There is so much to do in Connecticut in the summer, but it’s also a great year-round destination.

Share what you love about Connecticut in the comments. From outdoor activities to hotels and day trips, we want to hear about it.

FIND & BOOK A HOTEL WITH AAA IN CONNECTICUT