Folks who wring the maximum MPG out of a fill-up want something distinctly different than those who love to hustle down a curvy stretch of road. These two new models cover both ends of the spectrum. 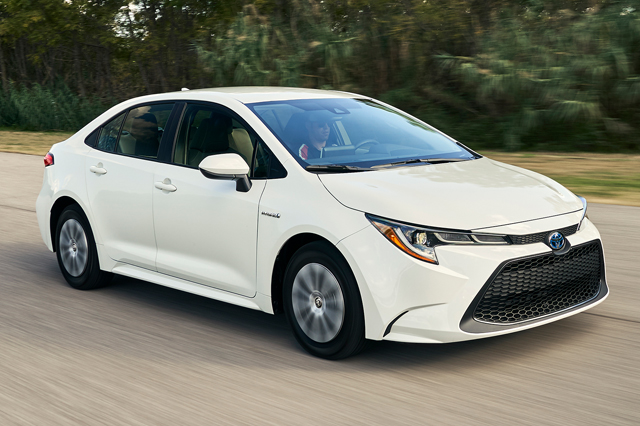 Whether you’re a hardcore hyper-miler who appreciates the challenges involved in maximizing your mileage or just someone who wants a car that will cut down on costly visits to the filling station, the new Toyota Corolla Hybrid is bound to impress.

The principal strength of this gasoline-electric hybrid version of the 12th-generation Corolla is its ability to stretch a gallon of pricey petrol to crazy lengths. With EPA fuel economy ratings you’d swear were a misprint (52 mpg in combined driving), the Corolla Hybrid gives you a range of better than 500 miles between gas stops. Acceleration is not exactly soul-stirring, and the handling and ride quality are both dialed-in more for comfort than speed.

The one thing you won’t get with the Corolla Hybrid, however, is anything resembling luxury. It’s offered only in the lowest LE trim level (and only as a sedan). While it comes with some nice extras including adaptive cruise control, advanced safety features and Apple CarPlay (Android Auto isn’t offered), plush it’s not.

That said, what you won’t get with the Toyota Corolla Hybrid isn’t any great sacrifice if you know the kind of performance you’ve signed up for going in.

If you’re in the market for a sports sedan, do not ask your car-loving uncle. Because chances are, he’ll steer you toward pricey European models and totally overlook one of the best bargains in the category: the Genesis G70.

You see, the truth is luxury brands like Genesis haven’t been around long enough to pop up on the radar screens of most enthusiasts. Which is a shame, as the compact G70 is an example of all that’s right with the brand.

If it’s performance you’re after, the turbocharged V-6 under the hood of the top-of-the-line 3.3T Dynamic model I drove offered as much acceleration as could be safely managed on public roads. The superbly tuned suspension also delivered an optimal balance of confident handling and a comfortable ride.

What really set my G70 apart was the quiet interior’s crazy-long list of standard features, most of which would be extra-cost options on better-established competitors.

Pencil in a price tag that’s thousands less than your uncle’s alternatives, and you have a reason to smile and nod knowingly when he offers you his opinion.