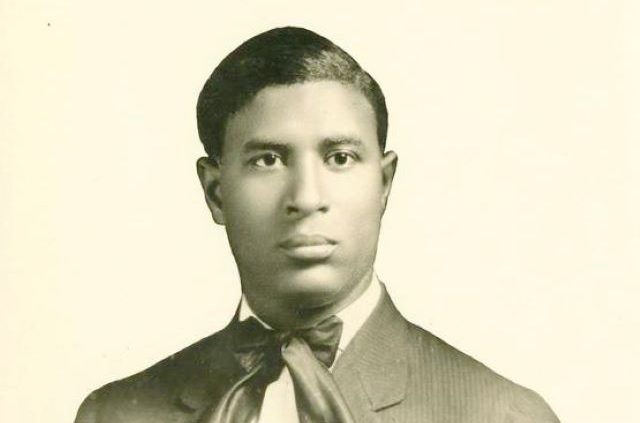 Some things in life are so commonplace, we hardly give any thought to how they came to be. Such is the tale of the humble traffic light. You can trace the modern traffic light back to Cleveland, Ohio, and the son of two freed slaves. Armed with nothing more than an elementary school education and an innate curiosity of how things work, Garrett Morgan patented several inventions that would revolutionize society.

Morgan was born in Kentucky in 1877. While still just a teenager, he left home and moved to Ohio in search of work. He first worked as a handyman in Cincinnati before landing in Cleveland.

At this point in American history – the turn of the 20th century – Cleveland’s garment industry was the second-largest garment industry in the country. Morgan got a job sweeping floors at a garment factory. Enamored by the inner workings of the sewing machines, he taught himself how to fix them (they broke quite often). Eventually he was hired as a repairman before opening his own repair shop.

It was while working at his shop that Morgan serendipitously created his first major invention. He was experimenting with a chemical solution that prevented sewing machine needles from overheating and burning the fabric. As the story goes, Morgan wiped his hands down before going to lunch. When he returned, the hairs on the cloth were perfectly straight.

Morgan then tried the substance on a neighbor’s dog before testing it on himself. Each time, the same perfect results. Whatever oils were in the substance were able to break down and relax hair fibers. Morgan bottled up the substance and G.A. Morgan’s Hair Refiner was born. He sold it around to African American communities around the country to great success.

With sudden financial security, Morgan was able to pursue other ventures. After watching firefighters struggle to breathe due to smoke inhalation, the inventor was struck with the idea of a safety hood. The device, which was patented in 1914, consisted of a hood placed over an individual’s head, connected to a long tube that reached the ground. Since hot air and smoke rises, the tube on the ground would deliver clean air to the person.

In 1916, the city of Cleveland was drilling a new tunnel under Lake Erie. Workers hit a pocket of natural gas, creating an explosion that trapped them underground. When Morgan heard what had happened, he and his brother donned the safety hoods and entered the tunnel themselves. They were able to save two lives.

Morgan’s safety hood is widely considered a precursor to the gas mask. With the onset of World War I – and the use of poisonous gas – Morgan won a contract with the U.S. Navy. The hood became standard equipment for the U.S. Army during the war.

Morgan’s successes allowed him to own an automobile, which was a rarity in the day (he was reportedly the first African American in Cleveland to have a car). Streets in America, though, were a mess in the early 1900s. With a combination of automobiles, carriages, bicycles and pedestrians, navigating the roads could be chaotic and dangerous.

One day Morgan witnessed a terrible accident at a Cleveland intersection and his brain once again went into solving mode. Traffic signals had already been invented but they only consisted of two signals. The problem was that drivers didn’t know when the “Go” signal was going to switch to the “Stop” signal. The result was that drivers would have to stop abruptly or still be in the intersection when vehicles traveling in other directions began to move.

To solve this, Morgan invented a T-shaped traffic signal that had a third, “caution” signal. When this signal was on, traffic in all directions stopped and intersections would clear. It would also allow pedestrians to cross before traffic started moving again.

On November 20, 1923 Morgan was awarded a patent for a three-position traffic signal. In essence, he had invented the yellow light. Morgan’s original traffic signal prototype is on display at the Smithsonian’s American History Museum.

Aside from his technical contributions to society, Morgan was a pillar in Cleveland’s African American community. He founded the Cleveland Call, one of the most important African American newspapers in the country, and was a leader in the city’s NAACP chapter.

Garrett Morgan passed away in 1963, one year before the passage of the of the Civil Rights Act.