The Healthiest Fast Food Options Based on Calories 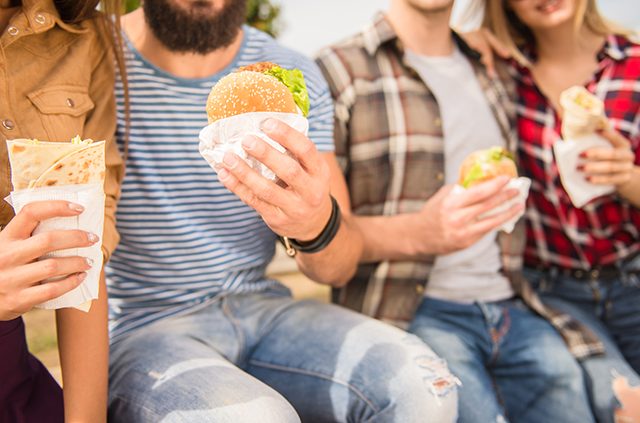 I’m going to go out on a limb and say that part of deciding to eat at fast food restaurants is making peace with the fact that you’re not going to be eating your healthiest meal. And that’s fine occasionally – so long as it doesn’t become too much of a habit. Everything in moderation is often the best policy when it comes to leading a healthy lifestyle.

But if you’re counting calories, fast food healthy choices do exist, believe it or not. Although the healthiest fast food options are not always as obvious as you might think.

Whether you’re having fast food because of what’s in your wallet, how much time you have, your kids or (admit it) a craving, it doesn’t always mean having to commit to the subsequent heavy, greasy guilt trip that inevitably comes with it.

Yes, you can still go to your favorite fast-food or fast-casual restaurants and eat well. We’ve outlined a few of the healthiest fast food options at 10 popular chains to prove it.

First things first, let’s understand some basics about calories. All of the following fast food healthy choices are based on calories, so what exactly is a calorie and why do we count them?

A calorie is a unit of energy that your body obtains from eating or drinking something. Ideally, you want to strike a balance where you are putting in as much energy as you lose in a day because if you consume more than you burn, the excess could be stored as fat. Check out the video below to learn more:

It makes sense why calorie counting is the focus of so many diet plans, but it’s important to note that is not the only thing you should consider if you want to lose weight healthily.

Per the most recently published Dietary Guidelines for Americans (2015-2020), women should consume an average of around 2,000 calories per day, while men should have about 2,500.

These are estimates based on average weight, physical activity and muscle mass, they are not absolutes. Depending on factors such as your age and activity level, you may require more or less calorie intake in a day. Take this Dr. Oz quiz to help you to determine the perfect calorie range for your metabolism.

Within your calorie limit, it is suggested that you should consume: Choose wisely. Some salads have just as much, if not more, calories than a hamburger.

Salad does not always mean healthy

One point to keep in mind once you’ve been lured into the glow of the golden arches – or bell, or smiling colonel – or whatever glow it may be, is not to be fooled by the common misconception that salads are usually the healthiest fast food options on the menu.

After you’ve factored in the amount of sugar and fat in some heavy salad dressings – not to mention all the fried bits that may be tossed into it – salads can easily have just as much, if not more, calories than a basic hamburger.

Well, one full serving contains 1,080 calories. That’s basically half of all the calories you should consume in an entire day in a salad. The Jack Daniel’s flat iron steak (without sides), on the other hand, only has 589 calories.  So if it’s any consolation, sometimes you’re better off just going with the steak (you know you want to, anyway).

Now let’s get to the good stuff. As of the publishing of this post, here are some of the top fast food healthy choices on the menus of 10 popular restaurants based on calories. All nutritional information has been obtained from each restaurant’s menu.

So now you know. You can have your fast food and be healthy, too. But try not to overthink it too much. If you’re routinely exercising and otherwise making smart food and lifestyle choices every day, an occasional cheat or treat is well-deserved.

Were you surprised to find out about some of these healthiest fast food options? Are you curious about the items at any other fast food restaurants? Tell us in the comments.