Feeling restless? Can't fall asleep? Instead of trying a white noise machine, try the best podcasts for relaxation and sleep. 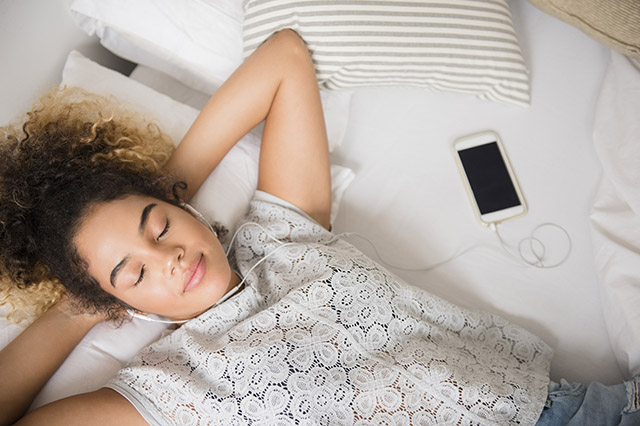 Not all podcasts are supposed to be listened to – some of them are just meant to be soothing background noise. When I was struggling with a bout of insomnia a few years ago, nothing I tried could get me to sleep. That is, until I found Sleep with Me, an (unfortunately named) podcast designed to lull its listeners into dreamland. Instead of a white noise machine, some people prefer to listen to the sounds of people talking. There’s nothing that puts me down faster. Here are the best podcasts for relaxation and sleep.

As I mentioned above, “Sleep With Me” was the first podcast for sleep I ever found – and it worked like a dream (pardon the pun). Using the moniker “Dearest Scooter,” host Drew Ackerman mumbles into the microphone for over an hour. Sleep with Me seems to work on dream logic itself, since Scooter doesn’t seem to have a script. He’s mostly saying what’s coming to mind. Once, he was trying to learn a new language by watching the Spanish dub of Breaking Bad, and many episodes of the podcast consisted of bizarre plot recaps mixed up with Scooter’s own thoughts and inventions. He also has a spin-off sleepytime podcast, “Game of Drones,” and you can guess what that’s based on. “Sleep With Me” isn’t really about content, though. It’s a story that’s impossible to follow, told in the most mumbly tones possible, and it’ll make your eyelids droop in minutes. Honestly, “Sleep with Me” is magic.

“The Empty Bowl” started as a joke between podcaster Justin McElroy and cereal-reviewer (really) Dan Goubert, but it quickly became an “oasis in a bowl,” a truly meditative podcast about cereal. McElroy and Goubert’s soft, laid-back cereal discourse is paired with a zen-like soundtrack designed to put you at ease. “Breathe and think about cereal,” McElroy says in the first episode, “That’s it.”

If you’re familiar with LeVar Burton’s PBS show, “Reading Rainbow,” welcome home. LeVar Burton Reads is sort of like “Reading Rainbow” for grown-ups. In this podcast, Burton hand-picks a piece of short fiction and reads it aloud to you. I say “to you” because it really does feel like a personal experience – there’s nothing like being read to. Burton selects stories from some of the best short story writers, including N.K. Jemisin, Ursula K. LeGuin, Octavia Butler, Ray Bradbury, Haruki Murakami and Neil Gaiman.

It’s all there in the title. Each episode, host Ian Chillag sits down and interviews an inanimate object. The interviews are improvised, but everything is true (other than the fact that most inanimate objects can’t talk). “Everything is Alive” is a strangely meditative journey into the quiet dramas happening all around us. “I hope I’m consumed by someone who enjoys it,” says Louis, a can of store-brand cola. Chioke, a grain of sand, appears later on in the series as Chioke, a pane of glass. “The doctors only hear Ringo, but I hear George and Paul and John,” says Scott, a stethoscope. It’s easy to get lost in the world of “Everything is Alive,” because it’s really our world.

“Nothing Much Happens” is billed as “bedtime stories for grown-ups,” and it delivers on that promise. Host Kathryn Nicolai tells a story two times in a row, going slower the second time to fully lull you into sleep. In the waking world, Nicolai is a yoga teacher, and she seems innately aware of the complex relationship between mind and body. She guides you through the story like an instructor might guide you through a series of poses – it’s like a type of yoga in which you don’t have to move at all. Nicolai’s stories are short and pleasant, with a relaxed mood focused on sensory details. There’s no conflict, not much of a plot. And just like that, you fall asleep.

“Meditation Minis” is a guided meditation with hypnotherapist Chel Hamilton – though it (supposedly) doesn’t actually hypnotize you. The episodes are mostly short, usually clocking in at the 10 or 15-minute range. Some episodes are specifically about improving sleep habits, though the meditations cover a wide range of topics and emotions.

Most Relaxing Voices in Podcasting

The following podcasts are not necessarily about relaxation, but the voices of the hosts are relaxing all on their own.

“You Must Remember This” – Karina Longworth

Do you have any favorite podcasts for relaxation? Tell us in the comments below (if you’re not too sleepy)!

Looking for even more shows to listen to? Check out my articles about the best history podcasts, the best film podcasts and the best limited-series podcasts!