Do you know your "watch" from your "warning"? Find out in this guide to storm categories and other meteorologist lingo. 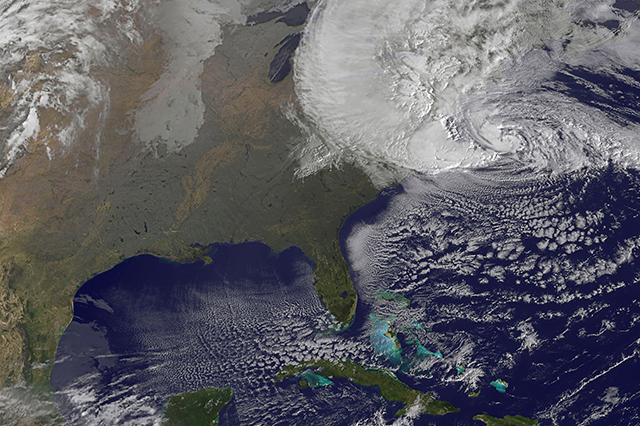 Storms are unpredictable, but the more we understand about the language used to describe them, the better we can prepare. Do you know your “watch” from your “warning?” As we head into hurricane season, brush up on storm categories and other storm terms with this helpful explainer.

How a storm is classified or described in a weather report is rooted in the strength and severity of the wind.

Dating back to the early 1800s and still used today, the Beaufort scale is a wind measurement tool developed to help sailors gather visual cues about the wind from the water. It goes from 0-12, with 0 being Calm (“sea like a mirror”) and 12 being Hurricane (“sea completely white with driving spray.”)

A 10 is officially considered a storm on the Beaufort scale, described as having 55-63 mph winds, big waves, low visibility and a chance of considerable structural damage. A Violent Storm (11) is even more intense.

Hurricanes are categorized using the Saffir-Simpson Hurricane Wind Scale. Ranging from 1 to 5, storm categories are based on a hurricane’s maximum sustained wind speed and estimated potential property damage. While all hurricane-force winds are considered dangerous, categories 3-5 are known as “major” hurricanes.

When you hear major storm terms in the forecast, it’s time to take action to protect your home, car and belongings, and in the worst cases, evacuate from the area. Hurricane-force winds and storm surges can be deadly.

Category 1: Sustained winds of 74-95 mph. Very dangerous. Winds can potentially cause damage to roofs, vinyl siding, gutters and shingles. Large branches may snap and trees may topple. Extensive damage to power lines and poles could result in power outages that may last several days.

Category 3: Major. Sustained winds of 111-129 mph. Devastating damage. Winds could cause major damage to homes including roof removal. Trees will be snapped and uprooted, blocking roads. Electricity and water will be unavailable for several days to weeks after storm.

Category 4: Major. Sustained winds of 130-156 mph. Catastrophic damage. Severe damage to homes, with potential to lose most of the roof and/or exterior walls. Most trees will be snapped or uprooted and power poles downed. Power outages may last weeks and possibly months. Most of the area could be uninhabitable for weeks or months.

Category 5: Major. Sustained winds of over 157 mph. Catastrophic damage. A high percentage of framed homes will be destroyed with total roof failure and wall collapse. Fallen trees and power poles will isolate residential areas. Power outages can be expected to last for weeks to months. Most of the area will be uninhabitable for weeks or months. 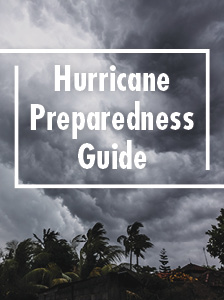 Learn how to prevent damage to your home, how to stay safe during a storm, when to evacuate and more.

The eye of a storm is its relatively calm center. The eyewall is the dense ring of clouds that surrounds the eye and contains the highest winds.

A radar tracking system that sends out energy signals from an antenna to detect the location and velocity of a storm in the atmosphere.

Sustained surface winds of 39-46 mph, strong enough to create high waves and break twigs off trees. At 47-54 mph, severe gale winds are more powerful and may cause some structural damage.

Since the 1950s, hurricanes and tropical storms have been given names to quickly identify and communicate them. The naming procedure, established by the World Meteorological Organization, is based on six lists of 21 male and female names on a six-year rotation. The only exceptions to the process are if a storm is so deadly and costly that a future storm of the same name would be inappropriate or if more than 21 named storms happen in a season; in these cases, a separate list of names is used.

An abnormal rise in sea level that accompanies a tropical storm system. When a storm surge combines with the normal tide, it is called a storm tide.

An explanation of common thunderstorms from the National Severe Storms Laboratory.

Singlecell – Small storms that grow and die within an hour or so. Often experienced on hot summer afternoons, they produce heavy rain and lightning.

Multicell – This system could last for many hours and has the potential to produce hail, strong winds, brief tornados and/or flooding.

Supercell – A long-lived (greater than 1 hour) storm that is tilted and rotating. It can grow as large as 10 miles in diameter and up to 50,000 feet tall. It only needs to be present for 20 to 60 minutes before a tornado could form. Most large and violent tornadoes come from supercells.

A group of storms arranged in a line that can be hundreds of miles long, but typically are not very wide. High wind, heavy rain and snow are signatures of these types of storms, which tend to pass quickly.

A rotating, low-pressure weather system that originates over warm, tropical oceans with maximum sustained surface winds of 39-74 mph. Once winds exceed 74 mph, it is a hurricane.

While they sound similar, each of these storm alerts means something completely different. Here is how the U.S. National Weather Service breaks them down:

Advisory – Issued when hazardous weather is occurring, imminent or likely. Used for less-severe weather conditions where caution is advised.

Watch – A weather threat is possible within 48 hours. Issued when the risk of a hazardous weather event has increased significantly, but exactly when or where it will happen is still uncertain. A watch is intended to provide enough lead time to start thinking about a plan of action or begin executing it if needed.

Warning – A weather threat is expected within 36 hours or less. Issued when hazardous weather is occurring, imminent or likely. Conditions pose a threat to life or property. People in the path of the storm should take protective action.

Hurricane deductibles are usually stated as percentage deductibles of your home’s insured value (often referred to as Coverage A on your homeowners policy) and normally range from 1% to 5%. This is the amount you would be responsible for before coverage would kick in and typically applies only when the storm has been categorized as a hurricane. While 1% to 5% may not sound like much, homeowners should do the math with their agent to fully understand how much they’re self-insuring for. Refer to your policy or speak to your agent to learn about the exact percentage of your hurricane deductible.

Insurance carriers may also offer windstorm, named storm and catastrophe deductibles, but keep in mind that your homeowners policy or any kind of storm coverage does not include flood damage. Flood insurance is a separate policy that must be purchased on its own.

Adding extra wind, flood or storm coverages to your policy may be worth it for you, or even necessary, depending on where you live. In high-risk coastal areas, the state government or mortgage lenders will likely require it.

Food spoilage coverage is something else to consider ahead of the next big storm. Losses related to power outages are one of the most common insurance claims during hurricane season. Food spoilage coverage may take care of the cost to replace the items in your fridge if your power goes out for a prolonged period.

Your homeowners policy will usually cover loss or damage caused by falling trees on your property due to strong storm winds. But what about protecting your car? Storm damage to your vehicle is covered as long as you have comprehensive insurance on your auto policy. Learn more about how to deal with trees in a storm.

Speak to a knowledgeable AAA Insurance agent to find out more about your storm coverage options.

What is your most unforgettable storm memory? Tell us in the comments. 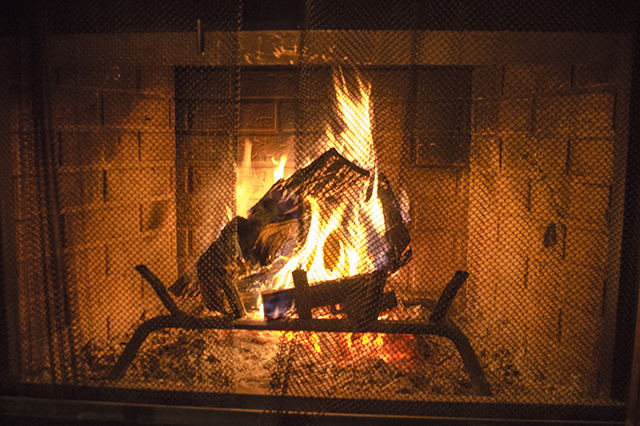 Whether you use a space heater or a fireplace to keep warm in winter, be sure to take necessary safety precautions. 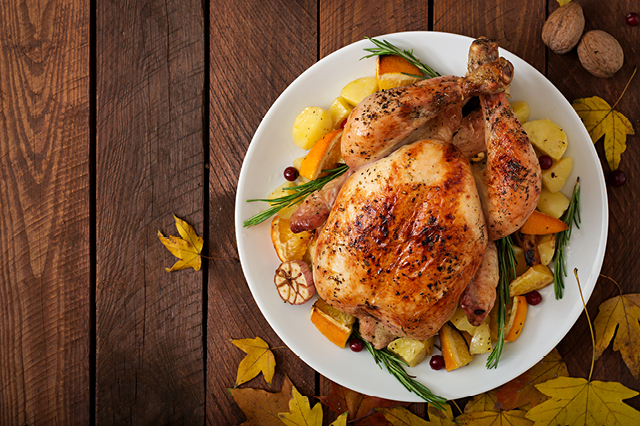 Cook Up a Safe Holiday

Keep your guests safe, stuffed and smiling with these Thanksgiving safety tips. 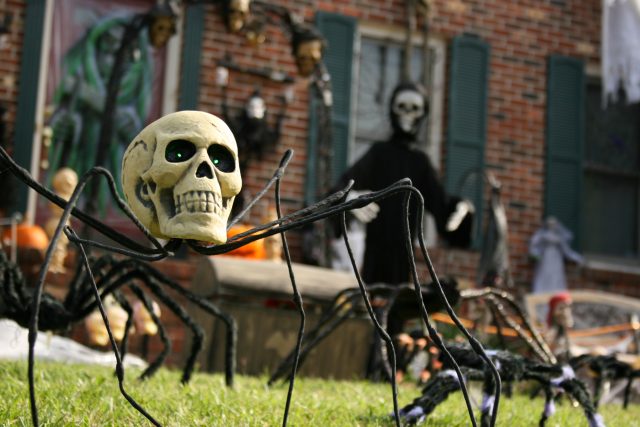 Protect Your Property From Halloween Mischief

Safeguard your property from tricks and other spooky schemes this October 31st.