Powwows are open to the public, creating a unique opportunity to learn about and enjoy Native American traditions. 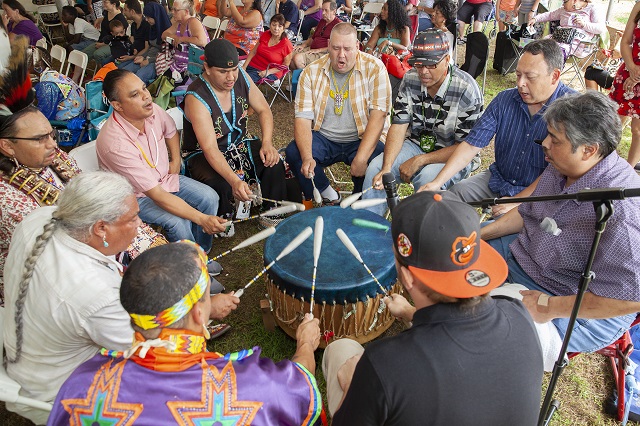 Powwows are gatherings that blend ancient and contemporary Native American customs, such as intertribal dances, foods, music and activities, into full-fledged festivals open to the public.

“Today’s powwows have evolved into a contemporary mix of dance, reconnection of family and friends, [a] supermarket of Native goods and arts, and festival,” said Yvonne Wakim Dennis, co-author of “Native American Landmarks and Festivals.” “Powwows are famous for their fanfare of colorful clothing, exhilarating drumming,singing and dance moves which have all been modified into a dazzling and exciting event enjoyed by both Native Americans and visitors. The Powwow is a major cultural activity that not only helps preserve a rich legacy, but illustrates the tenacity and strength of Native cultures that are living and dynamic.”

Powwows are open to the public, but Wakim Dennis reminds spectators to show respect.

“Spectators should enjoy themselves, but remember that for many participants, the powwow is a way of earning money,” she said. “It is also a serious time when participants, who may be marginalized from their own cultures in their daily lives, have the opportunity to connect with their friends, family and heritage.”

Here are just a few of the local powwows happening in the Northeast this summer and fall.

Each August, the tribe sponsors a free powwow-style event to celebrate the annual Green Corn Festival or Thanksgiving for the corn harvest. Here, the general public is invited to view dance competitions, musical performances, art shows and other special events.

Visitors can learn more about Mohegan culture and traditions including Native American crafts, foods, dancing and drumming. The family-friendly festival is free and open to all.

Saturday night includes a pot luck dinner in which guests are invited to bring side dishes, desserts or bread. Other activities include morning sunrise ceremonies, mother’s honor dance and a Saturday night talking circle.

The Shinnecock Indian Powwow is one of the largest Native American gatherings on the East Coast. Each day features competitive and ceremonial dancing, entertainment and prayers. Drum groups and dancers will compete for $50,000 in prize money.

New to the Hamptons? Here’s your comprehensive guide to the neighborhood.

Sponsored by the Laconia Indian Historical Association, this powwow features two days of dancing, drumming, demonstrations, crafts, food and traders. Guests can visit the snack shack for delicious food and drinks, including fry bread stand with wojapi (a thick berry sauce) and other toppings. A mourner’s feast takes place Friday at 7 p.m. and a candlelight vigil will be held at 10 p.m.

The event is highlighted by traditional Iroquois social dances performed by The Sky Dancers from Six Nations Reserve in Ontario. Storyteller Perry Ground of the Onondaga Nation, one of the original nations of the Iroquois, will tell tales of daring feats and astounding adventures.

A wildlife rehabilitator will discuss local wildlife conservation and show a variety of wild animals, including birds of prey. The museum’s archaeology department will give demonstrations of flintknapping and other early technologies. Delectable Native foods will be available from Haudenosaunee food vendors.

This year’s Saratoga Native American Festival will be held at the historic Congress Park and will include activities in the Saratoga Arts Center and the Canfield Casino. Authentic northeastern Native American Indian drumming and dancing, storytelling, music, crafts, and traditional native foods are just some of the things visitors will find.

The festival includes Native artists and artisan vendors selling their work, including traditional arts and crafts to more modern forms such as beadwork, quillwork, wampum, tufting, silver work, carving in wood, stone, antler and bone, leatherwork, oil painting and clothing. Crafting demonstrations such as basket weaving, jewelry making and carving will take place throughout the day.

Spending the weekend in Saratoga? Click here for more things to fill up your itinerary.

During this celebration, the Redhawk Native American Arts Council brings together a consortium of 14 indigenous organizations to bring awareness of Indigenous Peoples day, traditionally celebrated as Columbus Day. All are welcome to enjoy music, song, spoken word, artists and a guest speaker.

The Redhawk Native American Arts Council is a not-for-profit organization founded and maintained by Native American artists and educators living in the New York City area.

Have you ever been to a powwow? What was the experience like? Let us know in the comments below.

One Thought on “Celebrate Native American Culture at These Northeast Powwows”