Minor league baseball can be a less expensive, more entertaining alternative to major league games. Plus, teams are located in distinctly unique cities, ideal for exploring. 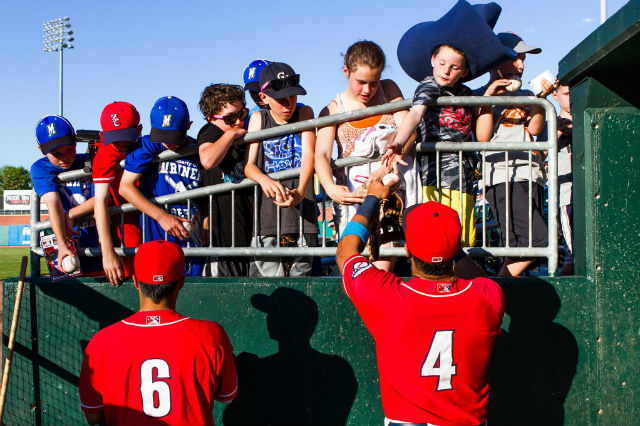 Some may say the smell of the flowers’ bloom is Mother Nature’s decree that spring has sprung. Others may simply chalk it up to a groundhog’s prediction. But to many, the true signaling of spring’s arrival is neither a smell nor a sight, but a distinctive sound: the crack of the bat.

Baseball season has arrived to wake us all out of our winter slumber. And while the major league gets most of the attention, minor league baseball games can often be a more enjoyable (and practical) experience. Because they’re not the biggest draw in the sports world, minor league games cater to the fans, offering inexpensive tickets, family-friendly entertainment and eccentric promotions.

Plus, minor league baseball cities are often smaller, unique and distinctively charming. Here are seven such locations in the Northeast worth traveling to.

Buffalo is the second-largest city in New York, so there’s plenty of attractions no matter what form of entertainment you’re seeking. If visiting Niagara Falls is on your bucket list, this is the time to cross it off the list. The state park is just a 20-minute ride away.

Buffalo is one of the few minor league baseball cities that is also home to other professional sports teams, the Buffalo Sabres and Buffalo Bills. While the Bills’ season doesn’t start until the fall, depending on the time of year you visit, you may be able to take in a hockey game and make it a fully sports-themed trip.

Make sure to include a visit to the Martin House on your itinerary. It was designed by Frank Lloyd Wright for wealthy Buffalo businessman Darwin D. Martin. Consisting of six interconnected buildings, the complex is considered to be amongst Wright’s finest achievements. It was designated a National Historic Landmark in 1986. Wright designed several residential and recreational buildings in Buffalo, all of which are available to tour.

Speaking of architecture, Sahlen Field, home of the Bison, is one of the most significant ballparks in all of baseball, even if it is relatively unknown to most fans. Built in 1998, Sahlen Field was designed by the architect firm HOK Sport as one of the first retro-classic stadiums, a style that features distinctive aesthetics and architecture, and a location within the downtown area. A few years later, the same firm constructed Oriole Park at Camden Yards, kicking off a new wave of ballpark design that has become commonplace across major league baseball.

One could spend a whole afternoon simply wandering the Coney Island boardwalk and only scratch the surface of things to do. But there are a few must-see attractions. One of those is Luna Park, an amusement park home to dozens of rides, games, shops and dining options. And don’t forget to take a ride on the Cyclone. Built in 1927, the Cyclone is the country’s oldest wooden roller coaster still in operation. After you work up an appetite, head to the corner of Surf and Stillwell for a hot dog from the original Nathan’s Famous location.

Another top Coney Island attraction is the New York Aquarium, home to 8,000 animals including penguins, seals and a variety of shark species. If you’re in the mood for some music, head to the Ford Amphitheater. Since opening in 2016, the venue has played host to a who’s-who of musical acts including the Beach Boys, Sting and Peter Gabriel.

The Cyclones play at MCU Park, steps away from the boardwalk. The park opened in 2001 and marked the return of pro baseball to the borough of Brooklyn for the first time since the departure of the Brooklyn Dodgers in the 1950s. It’s hard to beat the view at MCU Park, as the Atlantic Ocean dominates the skyline (and brings in some cool ocean breezes during the summer) and the famous Parachute Jump ride towers over the right-field wall.

Tucked away in the picturesque Hudson Valley, two hours north of New York City, sits the town of Wappingers Falls.

One of the area’s can’t-miss spots for culture lovers is Dia: Beacon. Opened in 2003 in a former Nabisco box printing factory, the museum presents the Dia Art Foundation’s collection of art from the 1960s to the present, as well as special exhibitions and public programs.

Just to the north of Wappingers Falls in Poughkeepsie, another kind of tourist attraction lets you enjoy the great outdoors. Built on a converted railway bridge, Walkway Over the Hudson allows guests to traverse the Hudson River. The site welcomes 500,000 visitors each year who walk, bike and run amidst its scenic beauty.

The Renegades play in Dutchess Stadium. Built in just 71 days in 1994, the stadium has also hosted numerous concerts over the years. Performers have included none other than Bob Dylan and Bruce Springsteen.

Scranton is more than just the home of Dunder Mifflin Paper Company. The northeastern Pennsylvania city played an important role in American history, one you can learn all about with a visit to the Electric City.

In the mid-1800s, brothers George and Seldon Scranton combined several smaller railroads to form the Delaware, Lackawanna and Western Railroad. This turned Scranton into a transportation hub. This history is immortalized at the Steamtown National Historic Site, a museum dedicated to Scranton’s railroad history.

Scranton also has a storied history in other trades that helped industrialize America. The Anthracite Heritage Museum showcases the story of coal mining, its related industries and the immigrant culture of northeastern Pennsylvania. For the brave of heart, you can also tour a coal mine originally opened in 1860. You’ll take a mine car down 300 feet to explore the winding underground rock tunnels and learn about the methods used in deep mining’s history.

When you get above ground, you’ll be happy to breathe the fresh air at PNC Field, home of the RailRiders. The stadium opened in 1989 and received a $40-million renovation in 2013.

Manchester lies along the Merrimack River in southern New Hampshire. One of its top tourist attractions is the SEE Science Center, which offers interactive exhibits for people of all ages. A particular highlight is the LEGO Millyard, which recreates Manchester’s Amoskeag Millyard as it might have looked circa 1900. It is the largest permanent LEGO installation at mini-figure scale in the world.

The Currier Museum of Art features European and American works by the likes of Picasso, Monet and O’Keeffe. It also offers tours of the Frank Lloyd Wright-designed Zimmerman House. The property is the only Wright-designed building in New England open to the public. If you’re looking for a show or concert, two of the area’s premier entertainment venues are the SNHU Arena and the Palace Theatre.

Located on the shore of the Merrimack River in downtown Manchester, Northeast Delta Dental Stadium has been home to the Fisher Cats since it opened in 2005. The 6,500-seat venue has an open concourse, allowing guests to see the game action wherever they are. In 2008, the Samuel Adams Brewhouse opened just beyond the left-field wall. The bar and restaurant is open before and during home games. A $1 million stadium renovation in 2017 added a state-of-the-art live music stage, a Tiki Bar and a rock waterfall at the top of the main entrance stairs.

Thoughts of Maine often conjure up images of scenic coastlines, and the seaside town of Portland brings those visions to life. A walk along Commercial Street lets you explore a working waterfront and dip into a restaurant of your choosing for another Maine staple: fresh seafood.

And when you need a beverage to wash down the delectable fare, you’ll soon discover you’re in the perfect town. Portland has become one of the country’s craft brewing epicenters. There are a host of local breweries all worth a visit including Allagash, Rising Tide and Shipyard, just to name a few.

If it’s a more high-brow experience you’re after, head on over for a tour of the Wadsworth-Longfellow House, where the iconic poet Henry Wadsworth Longfellow grew up.

When you’re ready to watch the Sea Dogs, Hadlock Field is a great setting to catch a game. The park takes a cue from Maine’s picturesque surroundings with a lighthouse that rises from the centerfield fence every time a Sea Dogs player hits a home run and when the home team wins. The stadium’s most prominent feature, however, is the “Maine Monster” in left field, a nod to the famed “Green Monster” at Fenway Park.

Norwich is located in the southeastern corner of Connecticut. One need not travel far to discover another type of fun other than America’s pastime. Mohegan Sun Casino & Resort and Mohegan Sun Arena are just a 15-minute ride away. And if you want to learn more about the Native Americans, past and present, that live in this area, visit the Pequot Museum.

If you keep driving south to the shoreline, you’ll discover several idyllic New England towns that offer a glimpse into the past as well as many fun and exciting modern-day attractions.

The Norwich Sea Unicorns are not affiliated with a major league team. Instead, they participate in the Futures Collegiate Baseball League, a summer league for some of the top college players. They play in Dodd Stadium, which has been home to minor league baseball for more than 25 seasons. The park is unique in that it is sunk into the ground, so fans enter at street level and walk down to their seats. A large concourse runs around the top of the seating area so spectators can continue watching the game as they walk around the stadium or stand in line for food. Popular seating options include the grassy berms down each line and a large picnic area that can be rented out.

Need a ride to the ballpark? AAA members can save up to 20% on Hertz rentals.

Have you been to any of the minor league baseball cities? What were some of the highlights? Let us know in the comments.

Where to See July 4th Fireworks in the Northeast

Nearly 48 Million Americans Will Travel This Fourth of July

It’s true, girls just want to have fun! Get your favorite gals together for an epic outing.

Where to See July 4th Fireworks in the Northeast