The magic is in the details. These Walt Disney World secrets will help you to gain an even greater appreciation for the fairy tale destination. 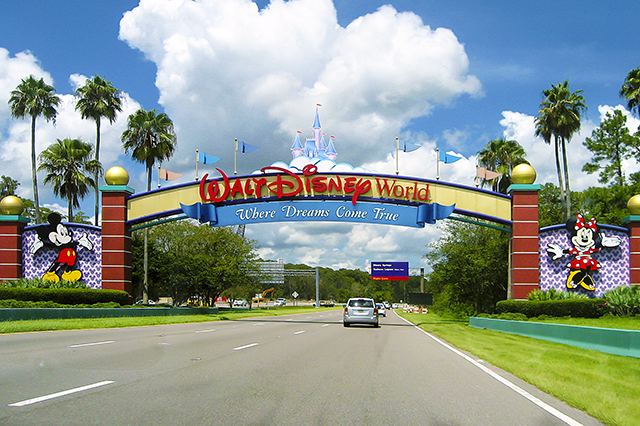 Like any good magician, Walt Disney World secrets are in place to maintain the fantasy that they create. At the home of Mickey and Minnie Mouse, it’s all in the details. From the grandeur of Cinderella’s Castle to the placement of the garbage cans on Main Street U.S.A., careful thought, attention and effort are put into every facet of every park to blur the line between illusion and reality and convince every Mickey-eared traveler that they are in fact, living in a fairy tale.

I am a huge Disney World fan, and have visited many times with my family. We have a terrible case of the Disney itch, which returns every few years without fail. From childhood to adulthood, I still feel the same sense of magic and pure happiness that Disney provides. It’s unlike anywhere else in the world.

Every time I go I always learn something new or notice some subtle nuance I’ve never seen before. The discoveries are endless.

That’s the thing about Disney – it does everything so precisely and so well that you always recognize the magic but you don’t always see it. Sometimes that’s on purpose, and other times things are hidden to be found. Just like in the movies, there are Easter eggs, fun facts and stories within the big picture. If you look, and look again, and look a little closer, you will likely find something that will make you smile.

There are several “behind the scenes” tours available such as the Backstage Magic tour and Disney’s Keys to the Kingdom tour, which reveal some Walt Disney World secrets. Though if you’re like me, you don’t want to know too much and run the risk of tarnishing the magic. I have to admit, I researched for this list with one eye closed.  Some things are better left to the imagination. Isn’t that the point, after all?

Here are 13 Walt Disney World secrets I’ve picked up along my Disney travels over the years, as well as some new discoveries worth sharing.

Note: Due to COVID-19, Disney is operating their parks as safely as possible. Some of the usual experiences mentioned in this article, like tours, character meet-and-greets, fireworks and parades are currently on hold and may look different in the future, but that doesn’t mean you can’t dream about them!

When you’re ready, AAA is here to help you plan and find exclusive travel deals on Disney World packages.

1. There is a whole other world beneath the “World.”

Disney World’s Magic Kingdom is actually the second floor of a massive structure of underground service tunnels known as “Utilidors,” which characters and other cast members use to travel from place to place. That’s why you’ll never see a character or cast member in costume from one land in another. Someone dressed in garb from Liberty Square will not be dressed that way in Tomorrowland. This helps maintain the illusion that you’re in a fantasy world made up of individual lands, not a theme park. Not so much one of Walt Disney World’s secrets, but definitely a fun fact: With about 64,000 cast members, the park has the largest concentration of employees in a single location in the country!

2. Ever wonder how Disney World remains virtually spotless with thousands of visitors every day?

For one, there is absolutely no gum sold on the entire Disney World property, significantly reducing the amount of gum stuck to the ground and surfaces of the parks. Trash cans are also never more than 30 steps away. Walt Disney himself studied park goers and counted how many steps it took before they threw their trash on the ground and 30 was the magic number. And where does all that trash go? One of the best-kept Walt Disney World secrets is that the Magic Kingdom has one of the largest vacuum trash systems in the world; the massive recycling system sucks all the trash from around the park into a central gathering area where it is then sorted.

3. When you meet one of your favorite characters, don’t be afraid to interact with them beyond just snapping a photo.

Ask Elsa if she wants to build a snowman, find out how many impossible things Alice accomplished that day, or try to get Buzz Lightyear to go into Latin mode and see what happens! To find characters in the park, consider the theme of the location. For example, Cinderella’s Fairy Godmother can be found beside the castle, while Princess Jasmine and Aladdin have their meet and greets at the Morocco pavilion in Epcot.

AAA’s famous diamonds make an appearance in the Tower of Terror in Hollywood Studios. While waiting in the queue, take a look behind the concierge of the Hollywood Tower Hotel to spot the AAA plaque that designates it as an unlucky 13 Diamond Rated hotel (the highest AAA Diamond Rating is actually five.) In the case of wait times, the number is a good sign. If you see 13 minutes posted on the standby line for the Tower of Terror, it usually means there is no wait at all – same for the Haunted Mansion.

Cinderella’s Castle is not as tall as it appears. If you look closely, you will notice that the bricks get smaller as the castle gets higher, making it appear larger. It is what Disney Imagineers call “forced perspective.” This same technique is used to make Main Street U.S.A. appear longer when you are heading toward the castle (to build up the excitement), but shorter when you’re tired and heading home. On Main Street, food shops are on the right side of the park as you enter, while gift and souvenir shops are mostly located on the left side, where most people usually walk upon leaving.

6. Secrets, surprises and hidden details are waiting to be discovered around every turn.

There are over 1,000 hidden Mickeys in Disney World. There is no definite number as they were never officially documented by Imagineers. Have you ever spotted one? Like hidden Mickeys, little details in the rides and lands are perfectly and purposely placed to make your entire experience more immersive. The Haunted Mansion is filled with such gems. There is a wedding ring in the cement as you exit the gates, supposedly thrown from the attic window from the ride’s featured ghost bride. And if you look closely you’ll notice that the spires on the top of the mansion are modeled after chess pieces – a subtle nod to the designers’ love for the game. Another fun fact: The music that plays throughout the ride is actually the same song, “Grim Grinning Ghosts,” played at different tempos.

7. Birthday, first-time visitor and other special event buttons are provided when appropriate.

Wear your button around the park and you’ll receive special recognition. On your birthday, you might get a treat from the restaurants, and Cinderella may even take notice as she passes by in the parade. You can ask for buttons at your hotel.

Disney introduced its new Magic Kingdom fireworks show “Happily Ever After” in May 2017 and trust me, you’ll want a view of the front of the castle for it. Arrive early, even up to an hour in advance, to grab a good spot. If you’re staying at a Disney resort that overlooks the castle, head outside for prime viewing. The resorts even play the same soundtrack as Magic Kingdom, so it’s just like being there but without the crowds.

9. The best time to go on the rides and avoid super-long waits is during a parade or the fireworks.

Guests of select Disney resorts can also enjoy Extra Magic Hours, where the parks are open for an extra hour before the scheduled opening time or after the scheduled closing time.

10. Main Street U.S.A. is made to feel like a production.

There’s a reason why you can’t see the castle until you fully enter the gates of the Magic Kingdom. Right down to the smell of popcorn popping at the entrance, Walt Disney wanted guests’ arrivals to elicit the same buildup as going to see a movie. Marquees and coming attraction signs line the pathway to Main Street, and then, like opening the stage curtains, the headlining feature – the castle – is revealed. If you look up at the windows of the buildings, you’ll see the “credits” of the people who helped create the park.

Main Street was Walt’s vision to transition guests from the real world into Disney World. It was inspired in large part by his hometown of Marceline, Mo., and he incorporated many aspects of his life into the details. The romanticized small town represents America in the early 1900s, when exciting changes in technology were taking place and the future looked especially bright. If you spend some time on Main Street you’ll realize that every part of it is alive – from the barbershop quartet singing in the street to the sounds of vocal scales and tap dancing that can be heard from the upstairs windows marked “music lessons.”

Request a wake-up call at one of Disney’s on-site hotels and start your day off with a greeting from Mickey Mouse or one of his friends. And if you happen to still be wandering out of the Magic Kingdom about 30 minutes after it closes, keep your eye on the castle for a “kiss goodnight,” a brief light show on the castle and message to bid guests farewell.

13. The best time to visit Disney World is usually in the winter.

Florida weather is great in the winter, with temperatures in the 70s and sunny skies almost every day. The park is emptiest from Labor Day to the time just before Christmas, minus school vacation weeks. Christmastime is very busy, and the Magic Kingdom often sells out. July is the busiest and also one of the rainiest months, but thunderstorms quickly pass.

Do you know of any other Walt Disney World secrets or fun facts? Tell us in the comments.

Exclusive Walt Disney World packages and deals are available to AAA members. Start planning your next Disney vacation with AAA.