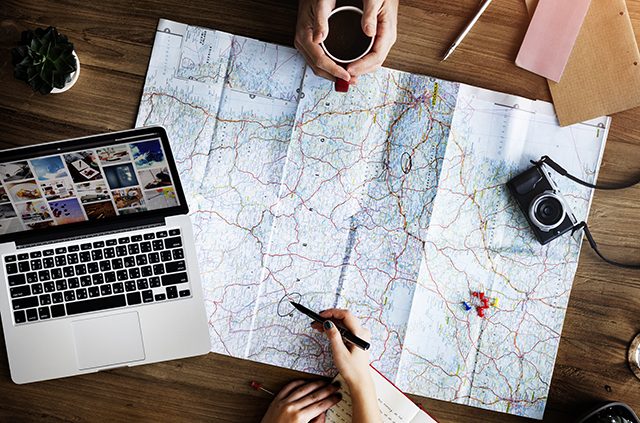 Many people still use paper maps.

It can feel like technology has replaced everything, especially when it comes to how we travel. For discovering a nearby place to eat or finding the fastest route to your destination, the trusty spiral bound map in your seat pocket has become the Maps app on your smartphone.

Nevertheless, people still seek out paper maps. They evoke an aesthetic and wonder that you can’t get from a small screen. Plus they don’t need to be charged and they don’t use your data.

TripTiks Then and Now

AAA has a grand tradition of paper maps through TripTiks, which have guided generations of travelers.

In the days before Google Maps, Google, or even the internet, a traveler would go to their local AAA branch to plan a road trip. This AAA member would tell the office where they were starting and their intended destination. An agent would draw the route with a highlighter on a series of numbered maps, going through the route with the driver before they started. The end result, a guided route through a series of maps, was called a TripTik.

A quick origin story: in the early 20th century, most roads were dirt and gravel. AAA produced strip maps so early drivers would know which roads were useable. The first modern TripTiks — spiral bound notebooks filled with maps — were made in 1937, and AAA started mass production the following year.

These TripTiks were customizable too — AAA would also point out sightseeing, amusement parks, construction, heavy traffic, rest stops, gas stations and all other points of interest to the traveler as well, and note as many or as few as the traveler chose.

Does AAA Still Do TripTiks?

AAA still offers TripTiks, not only as a paper map through mail order and branch offices but online and on the mobile app. The app highlights AAA-diamond rated hotels and restaurants, directions, attractions and more, with information from AAA travel editors. It even lists current gas prices!

There are also virtual guidebooks for journeys across the United States, Canada and Mexico. These come with itineraries to get the most out of any destination, even in a limited amount of time.  Traveling as a family? Don’t worry – there are lists of kid-friendly attractions too.

Mobile Maps Are Good but Not Perfect

Not to rag on smartphones, but they don’t always work for navigation. Don’t get me wrong – I use my mobile device to get places all the time. Google Maps is one of my most-used apps. I would get lost a lot without it.

However, mobile maps have let me down quite a few times, most memorably when I was driving upstate to meet friends. The app quit on me, and I had to pull over to get my phone working again. That was not what I wanted to do while driving in an unfamiliar area. And my friends were not happy that I was an hour late.

Phones get confused. Sometimes they get stuck on a location and refuse to move on. Literally.  Sometimes you don’t have a signal, especially in rural areas. Phones are also delicate; they can’t function if they get wet or overheated.

And too often, phones run out of battery and die. That’s why it’s a good idea to have a paper map as well. It never hurts to have a backup plan. Besides, map reading is an important skill, especially if you’re in an unfamiliar area.  If you can find where you are, you can find a way out. This is best practiced with paper maps.

Not to brag, but I’m pretty good at reading maps. I credit those skills to middle school Science Olympiad. (Science Olympiad is a school science competition, by the way. It’s like Mathletes, but for science.) In my main event, “Road Scholar,” I had to read topographic maps to answer questions, calculate distances and find points of interest— with a time limit. It’s great practice for real life navigation.

To this day I’m an excellent map-reader, thanks to spending a lot of time with a map in front of my face. I’m the go-to GPS reader on road trips and paper maps get handed to me on family vacations. I didn’t ask for this, but I’m not complaining.

Besides, maps make excellent vacation souvenirs. It’s a sweet way of knowing exactly where you went.

In the end, there’s something beautiful in using a paper map.

What’s more majestic than hiking through the great outdoors with a giant map spread out in front of you, echoing the terrain in your path? With a paper map, we see more of our surroundings, less of ourselves. Unlike an app, the map isn’t focused on you. You have to find yourself. It’s almost poetic.

To quote the musical “Fun Home,” maps show you what is simple and true. Paper maps are visceral — you can feel a map, you can move it around, touch it. They’re beautiful and aesthetically pleasing.

Around, the world, paper map sales are holding steady or even increasing. Hikers rely on paper maps. AAA distributed nearly 42,000 paper TripTiks in 2014.

So the answer to the question, “Does AAA still do TripTiks?” is that AAA is here to help, no matter how you prefer to travel. So get out your map (or phone) and start exploring.

When was the last time you used a paper map? Tell us in the comments below!

Let AAA help you to plan your next road trip and get you where you want to go. TripTiks, maps and tour books are available online, through the AAA mobile app and at your nearest AAA branch.