A single organization cannot improve traffic safety by itself. It takes the commitment of many stakeholders statewide, including traffic safety advocates, police officers, lawmakers and others. In November, AAA Northeast celebrated those efforts during the club’s annual AAA Community Traffic Safety Awards luncheon in Providence. Rhode Island Senate President Dominick Ruggerio and House of Representatives... 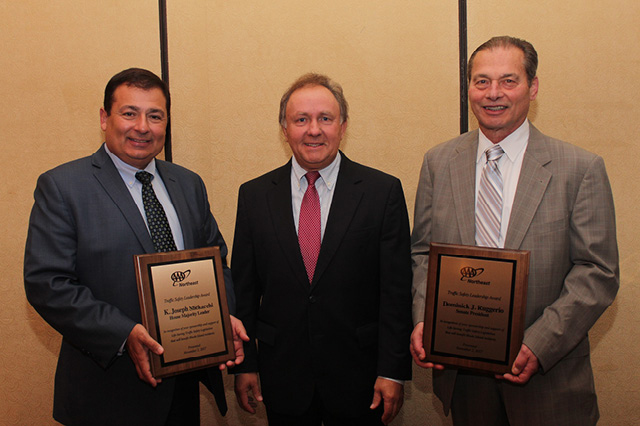 A single organization cannot improve traffic safety by itself.

It takes the commitment of many stakeholders statewide, including traffic safety advocates, police officers, lawmakers and others.

Rhode Island Senate President Dominick Ruggerio and House of Representatives Majority Leader K. Joseph Shekarchi each received a Traffic Safety Leadership Award. They were instrumental in passing a law requiring children to ride in rear-facing car seats until age 2. The practice has been found to significantly lower car crash injury rates in children age 2 and under, and mirrors a recommendation from the American Academy of Pediatrics.

Rhode Island is one of just eight states nationwide with such a law.

“I want to commend AAA not only for the service they provide their members, but also for their focus on safety on the roadways. They’ve done a phenomenal job,” Ruggerio said. He and Shekarchi also praised law enforcement officials for their never-ending work to keep roadways safe.

During the ceremony, the club commended communities that have gone consecutive years without pedestrian fatalities. The club honored Barrington for a 57-year streak that leads other noteworthy tallies like those of Jamestown (33 years), Burrillville (29), Little Compton (27) and Charlestown (20).

“We at AAA are happy to recognize the tremendous work of so many individuals, departments and organizations who work tirelessly to support this incredibly important issue,” said Lloyd Albert, senior vice president of public and government affairs. “While there will always be work to do, knowing Rhode Island is home to so many invested, dedicated individuals and organizations gives me optimism that we will continue to have a positive impact on the safety of all roadway users.”